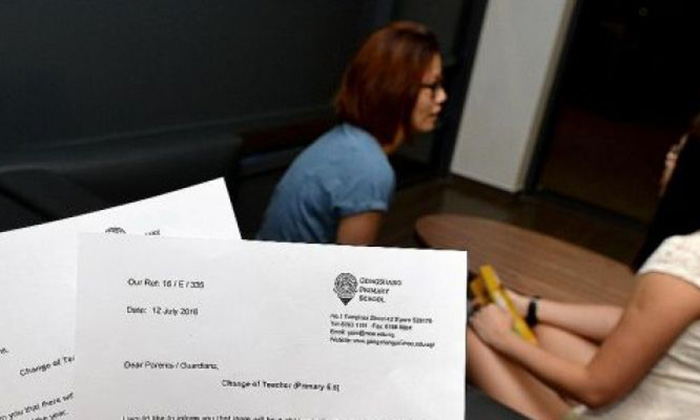 She has been accused of denigrating her pupils with such insults as "a disgrace to God" and "a bunch of retarded monkeys".

The teacher has also allegedly threw objects such as staplers, marker pens and water bottles at the children, and made them kneel in front of the class for talking.

The New Paper understands that parents have been complaining about the Gongshang Primary School teacher since March.

Yesterday, the Ministry of Education said the teacher was taken off all teaching duties this week while it investigates the complaints.

Mr George Cheah, the school's vice-principal (administration), said in a statement on Thursday night that it "takes any misconduct of our teachers very seriously".

The mother of a Primary 5 boy whom the teacher allegedly called "a disgrace to God" told The New Paper on Thursday that she and her husband complained to the principal and vice-principals on Monday.

Madam Josephine Chua, 42, also lodged a complaint with the Ministry that afternoon.

The principal called her later that day to say that the teacher, who teaches science and mathematics, would be replaced for core subjects, but would still teach non-core subjects in school.

A circular was issued by the school on Tuesday that another teacher will be taking over her lessons.

Madam Chua was not pleased with this arrangement and decided to speak to the media.

Describing the arrangement as just "downplaying the severity of the matter", she told TNP: "Very little has been done, and there has been no proper or appropriate intervention from the school."

She said that when she found her son sobbing and saying that he was "a disgrace to God", she knew she had to do something.

She was shocked to learn that his science teacher had made that demeaning remark thrice after he misbehaved in class.

She found out from her son only about two weeks ago when she had to acknowledge a remark from the teacher in his journal.

"That actually threw me off," said the housewife.

"I just felt really sorry for him."

Her son was also made to kneel in front of the class beside the teacher's table with another pupil when they were caught talking.

Her son confirmed that it happened more than once.

Since March this year, several parents had complained to the form teacher of her son's class about the science teacher throwing marker pens, staplers and water bottles at the pupils whenever she was angry.

Madam Chua said that she knows of at least eight other parents who have made complaints against this teacher.

TNP understands that a pupil suffered a cut lip after a marker pen hit him.

After Madam Chua highlighted the matter to the science head of department in April, another teacher was made to sit in for lessons.

She alleged that the teacher continued her behaviour after the June school holidays and intimidated the pupils.

"If you're constantly in an environment like that, you really won't enjoy going to school," she said.

Another parent, Madam Joey Hoe, 32, said it was a "daily affair" that her son was scolded by the teacher for being chatty.

She is the form teacher in the boy's Primary 3 class.

Madam Hoe also recalled an incident where the teacher told the class that she knew whose parents had made complaints against her.

"My son came home and kept asking me if I had made any complaints to the school," said the general manager.

"He looked so afraid, and when I told him I didn't, he was so relieved."

Madam Hoe's son recounted several instances when the teacher forcefully grabbed him by his arm and pulled him to sit on the floor with the chair as his table.

Recalling the teacher as "helpful" and "friendly", Madam Hoe said: "I am quite surprised that she is such a terror to the kids in class."

Another parent, who declined to be named, said her son, who is in the same class as Madam Chua's son, had seen the teacher throw a marker pen, which hit his classmate on the head.

He also told his mother that he has to "be alert and learn to dodge" when the teacher throws marker pens in class.

In February, the teacher called her son and a few classmates "a bunch of retarded monkeys" for forgetting to bring their science books two days in a row, she said.

She recalled another incident when her son had to move closer to the whiteboard to make out what was written because of his high myopia.

But the teacher told him to return to his seat and said: "Too bad that you can't see, go get new spectacles."

Madam Chua feels strongly that something should be done about the teacher, empathising with the pupils because they are helpless.

She said: "Every kid has the right to study in a safe and conducive environment."

Teacher under probe by MOE The Ministry of Education (MOE) and the school yesterday said that the teacher had been relieved of her teaching duties pending investigations into her conduct.

A spokesman for MOE said: "MOE takes a serious view of misconduct by teachers and is currently investigating the case. Teachers who fail to comply with our standards of conduct and discipline will be subject to disciplinary action."

He added: "After receiving the parents' feedback, the school leaders met with the parents to understand their concerns. Our students' welfare remains our top priority."

Previous cases July 2016 A teacher at Zoo-phonics School (Serangoon Central) borrowed a hair clip from a female pupil and used it to clip the long hair of a boy in front of the class.

The teacher, identified as Ms Theresa, was earlier suspended during investigations for humiliating the pupil.

The school has since found her fit to continue teaching.

October 2015 Two pre-schoolers at Zoo-phonics School (Bukit Timah) refused to go to school, with one claiming that the teacher had hit him with a pen.

He had small bruises on his limbs.

The teacher resigned after the allegations of abuse surfaced.

July 2013 A former part-time teacher with the Toa Payoh Central branch of My First Skool Centre was sentenced to three weeks in jail in November 2014 for manhandling a two-year-old boy in her class.

Security camera footage showed the teacher grabbing the boy's upper arms and shoving him backwards onto the floor twice in the July 2013 incident.