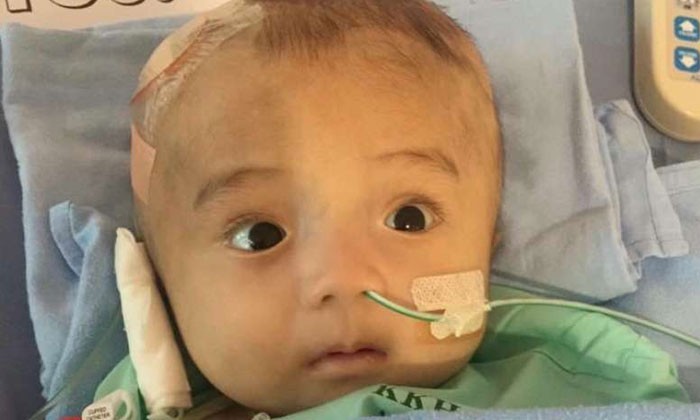 An orphaned Vietnamese baby with hydrocephalus is now fighting for his life at a Singapore hospital.

A crowdfunding campaign for his operations at the KK Women & Children's Hospital has been set up by restaurant owner Nguyen Hong Thao, 33.

The monks took him in and he joined more than 90 orphans living at the temple. But two months later, a doctor conducting medical checks on the orphans found that baby Loc had "a problem with his head", Ms Nguyen, who runs Thien Long Vietnamese Restaurant, told The Straits Times.

He has hydrocephalus, or "water on the brain", a build-up of the cerebrospinal fluid that surrounds the brain.

Loc was treated at two hospitals in Vietnam, but about a month after his second surgery, he was pronounced incurable by the doctor, she said.

The Vietnamese community in Singapore, who learnt of his plight, suggested to Vietnamese monk Thich Le Hieu to bring baby Loc to the city state, Ms Nguyen said.

Baby Loc came to Singapore on Jan 12, and was admitted to KKH on the same day.

He has had two surgeries performed so far and has another scheduled on Monday (Feb 13), Ms Nguyen said.

His condition has improved in the month since he came to Singapore, she said.

But he is undergoing at least one more operation on Monday.

Ms Nguyen explained on the Give Asia website that the fluid in Loc's brain was confined in one part of the brain, but it has now flowed to various parts, complicating his situation.

Doctors will insert a camera in his brain on Monday so they can observe the fluid and find a way to move it to one spot for easier drainage.

Before this, they have racked up fees of more than $70,000 for his treatment and hospital stay.

The online campaign has raised about $74,000 as of Sunday afternoon, and Ms Nguyen said other kind donors have provided at least $30,000 more, but they are unsure how much more may be needed as more treatment is required.

The hydrocephalus has also caused Loc to develop problems with his eyes and lungs. The condition has affected much of his brain function, but they hope it can recover partially when the fluid is drained.

Many Singaporeans have also chipped in to help, and to spread the campaign on social media.

One of those who came across the online appeal was Nee Soon GRC MP Louis Ng, who visited Loc on Friday.

He also helped to spread the word for Loc on his Facebook page.

Mr Ng wrote: "Visited baby Loc today and it was heartbreaking and painful to see a little baby with so many tubes attached to him...I also met the Singaporean, her friends and the temple monk who have been helping him."

Mr Ng told The Straits Times he will visit Loc again after his latest operation.

"I don't think there's a worse situation for a baby to be in, if there's anything I can do to help I should," he said.

The people who have got together to help a baby who is unrelated to them deserve recognition, he added.

Related Stories
15 people share the most heartbreaking and insensitive things that have ever been said to them
7,257kg whale butchered outside Jiangxi office building for dog food
baby
singapore
heartbreaking
Vietnam
hospital