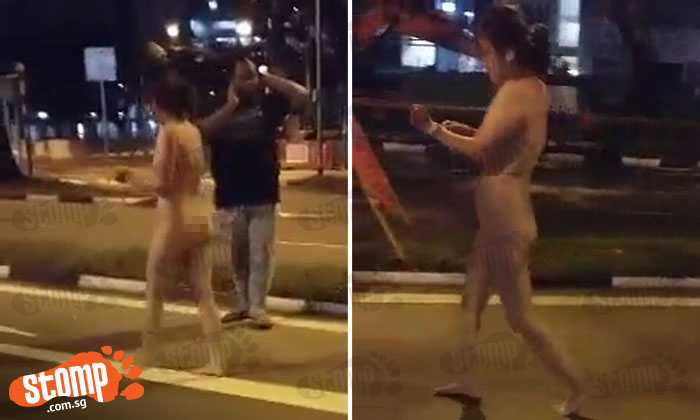 Stomper Ahmad was at the void deck of Block 11 in Upper Boon Keng in the morning of Jul 17 when he heard someone shouting at a nearby road.

Upon investigation, he saw a naked woman walking on the road.

In a video the Stomper took, the woman can first be seen walking on the right lane of the road.

The Stomper's friends then approached her and tried to talk her into going onto the pavement.

The woman ignored them and continued walking.

According to the Stomper, the woman seemed to be deliberately trying to get herself hit by oncoming vehicles.

"The woman who looked to be in her 20s was signalling to drivers on the road to hit her.

"As I was taking the video, I was shouting to my friends not to touch her but just try and block her way in case there was any misunderstanding."

Towards the end of the video, the woman was blocking a taxi as well as a lorry that was turning. Instead of giving way to the vehicles, the naked woman simply continued walking on the road.

The Stomper's friends once again tried calling out to her to prevent her from getting hit by vehicles. She however continued to be nonchalant.

"We called the police after that. When they arrived, they covered up to woman. As they were doing so, the woman still started shouting again. I am not sure what happened after that," said Ahmad.

Said a police spokesperson with regard to what happened:

"Police receieved a call at about 5.19am requesting for assistance along Upper Boon Keng Road.

"Upon arrival, it was established that a case of attempted suicide had occured at the said location.

"A 24-year-old woman has been arrested in relation to the case.