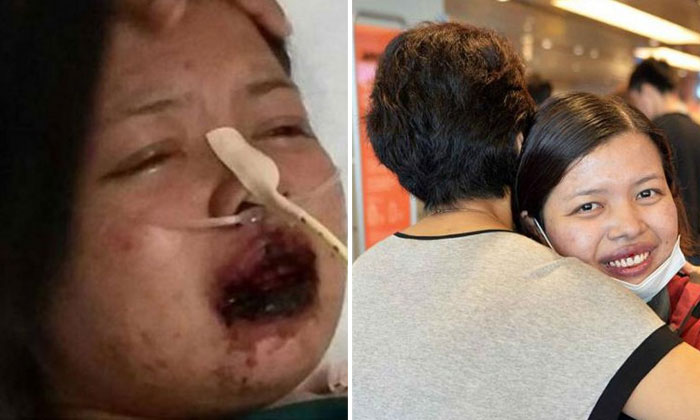 An Indonesian maid, who was in critical condition after contracting a rare disease that made her skin peel off in patches, recovered after nearly a month in hospital and flew home yesterday.

Her employer, Ms Jobina Tan, had set up a fundraising drive on Web portal GiveAsia to pay for her maid's medical bills and flight back home. It drew nearly $22,000 in donations from 142 people.

"Titin has been working as a domestic helper in our family for the past 12 years," wrote Ms Tan, adding that she was admitted to Tan Tock Seng Hospital on June 10 with swollen eyes and a high fever.

"In a matter of days, her condition worsened drastically. Her throat, mouth and lips were covered with numerous ulcers which caused her to spit out blood... Skin started peeling off from all parts of her body," she wrote.

In an interview with Chinese evening daily Lianhe Wanbao just before she left for home yesterday, Ms Titin said it was a "miracle" that she managed to recover.

"Before, when my dressings were changed, skin would be torn off as well," said the 31-year-old. "The wounds were oozing blood and pus, and the pain was terrible."

Ms Titin is believed to have been suffering from a severe reaction to antibiotics. Her wounds resembled those of a burn victim because she had lost so much skin, and even her lips turned black.

Last week, Ms Tan posted on the fundraising page to say that doctors had been trying different antibiotics to find a cure. They managed to treat Ms Titin's scars with a special kind of plaster.

Ms Tan told Lianhe Wanbao yesterday that her employee's medical bills amounted to more than $25,000. She had initially expected to have to pay at least $30,000 on top of the medical bills to send Ms Titin home on a special flight. However, Ms Titin recovered sufficiently for her to take a commercial flight home, although she will still have to undergo treatment in Indonesia.

Ms Titin gave Ms Tan a hug at the airport yesterday morning before she left. "I am very thankful to my employer and to the public for their help," she said.