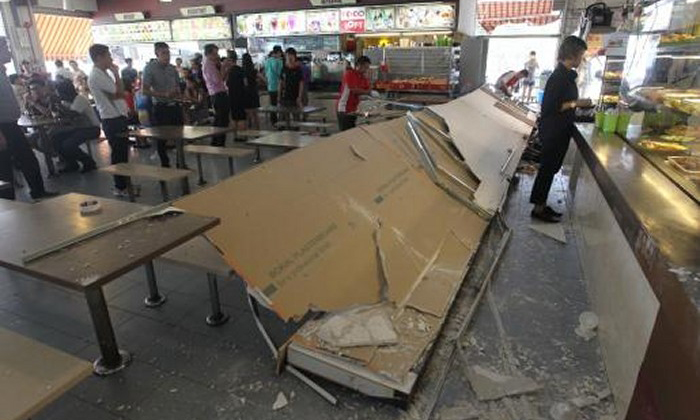 He had just finished his meal at a busy coffee shop in a MacPherson industrial building when he heard people shouting out a warning.

He froze, and the next thing he knew, a 10m-long signboard had fallen nearby, pinning a woman in her 50s against a fridge behind her.

Mr Wang Hong Ming, 34, one of the patrons of Food Loft coffee shop, told The New Paper (TNP) in Mandarin:

"It all happened so fast and I think she couldn't react in time."

He said he was the first to rush to her aid and he quickly lifted off the signboard, which had fallen on her chest.

The incident happened on Wednesday.

"When I got the signboard off her, I didn't see any blood, but her face turned very red," said Mr Wang, who works nearby.

"I had no time to feel scared. If you see something like that, what would you do?"

When it fell, the long signboard, which was for four stalls, took down with it part of the false ceiling at the coffee shop at Lorong Batu Bakar, off MacPherson Road, reported Lianhe Wanbao.

When TNP visited the coffee shop yesterday at 4.30pm, the space where the signboard had fallen had been swept clean.

Most parts of the ceiling have also been fixed.

Some debris was spotted in one of the stalls.

A coffee shop worker, believed to be the supervisor, said she had not been present when the signboard fell.

The woman, who declined to be named, said in Mandarin: "The signboard is in the midst of being repaired."

Sales were also unaffected, she said, with roughly the same number of customers streaming into the coffee shop as on a regular day.

But the stalls close to where the signboard had fallen said their businesses were affected.

The owner of the stall right next to the fallen signboard, who wanted to be known only as Mr Lim, 60, said in Mandarin:

"My business was a little affected because people now find it inconvenient to walk to this stall."