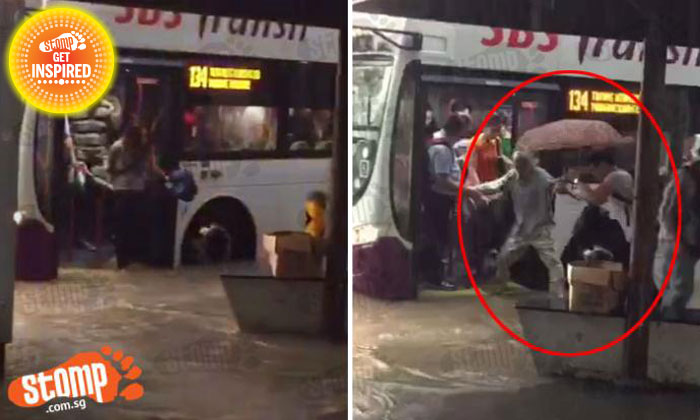 It has been a wet Christmas Eve today (Dec 24) as parts of Singapore were flooded no thanks to the heavy heavy downpour.

One act of kindness however has lit up the otherwise gloomy day.

Stomper V sent Stomp a video showing a Good Samaritan who helped shelter and assist passengers as they were alighting from bus at a bus stop near Tanjong Katong Complex.

In the video the Stomper sent, the double-decker bus can be seen travelling through the flooded road before approaching the bus stop.

After its doors opened, passengers were hesitant to alight as the bus stop was flooded and it was still raining.

Seeing what was going on, a man clad in a white T-shirt rushed to the entrance of the bus and starting sheltering alighting passengers with an umbrella.

He also held their hands to ensure that they had a safe landing as they stepped onto the flooded bus stop. He helped a total of eight passengers.

Other areas in Singapore were also not spared from the floods.

In one of the videos, water levels reached as high as the wheels of a car.

Stomper Koh also alerted Stomp to a video on Facebook showing a flood along Paya Lebar Road where water levels were similar to that of the flood at Upper Thomson.

The netizen who uploaded the video cheekily left a caption reading:

Lastly, Stompers Kevin and Ah Boy sent Stomp photos showing a flood at Ubi that led to a traffic jam.

The day might have been a bad one for some, but we certainly hope you guys will not let the rain dampen the Christmas spirit!

The first video below shows the Good Samaritan helping passengers off the bus as well as the flood at Tanjong Katong. The second and third video show the flood along Upper Thomson and Ubi respectively.