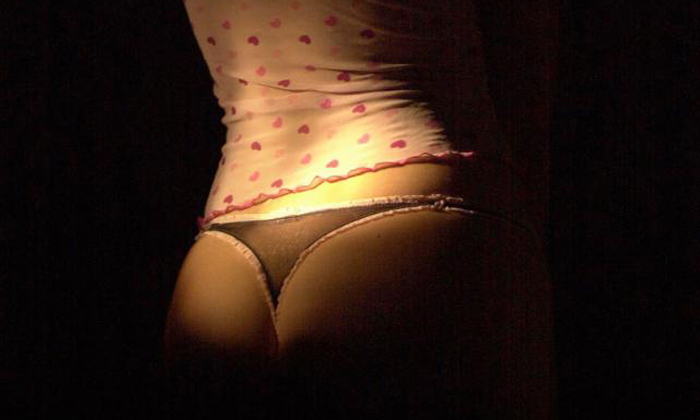 Used panties, which sex acts are performed in, are being sold here through social media.

For the right price, they are also hand-delivered by the girls who allegedly wear them.

One seller, who calls herself Joyce, claims to be an 18-year-old girl "fresh out of JC (Junior College)", and sells each pair for a starting price of $20.

Prices increase depending on how long they are worn and whether sex acts are performed in them.

Pages selling these items appeared on social media recently, with pictures of the undergarments as well as various obscene photos of the alleged sellers.

A post on one page claimed that they are "guaranteed to satisfy your school girl fetishes and much more".

The goods were also usually sold out within a week.

Posing as a buyer, The New Paper contacted the user who set up one of the pages and was offered a pair from one of the girls for $80, after it had been worn for 12 hours and soiled from a sex act.

The seller added that it would be freshly soiled.

She then offered to do a meet-up at Bugis the following day for an additional sum of $70.

After agreeing, the seller sent over pictures of different panties and said to pick one, as though browsing through a catalogue.

She also asked for a down payment of $50, which was to be transferred to a POSB savings account before the meet-up, while the remaining amount was to be paid in cash.

TNP did not go through with the transaction.

Posing as a girl interested in joining the venture, we contacted the same user and were told to wear panties and perform sex acts in them.

She also claimed that each pair could be sold for more than $200 on average.

The user then said to record videos of the sex acts to sell with the soiled panties for an additional $30.

This was followed with questions about body type and education background, as well as requests for nude photos to be sent over.

When TNP identified ourselves, asking why she is selling panties, how many have been sold and if she knew posting obscene photos was a crime, the user stopped replying.

The page was also taken down shortly after.

When contacted, lawyers said that the selling and buying of used panties online is not illegal, but the posting of nude or obscene photos online is a crime.

Criminal lawyer Ravinderpal Singh of Kalco Law said: "On the face of it, there appears to be no offence committed unless there is more to it.

"There can be an offence if it's the posting of obscene material, but it would be difficult to prosecute."

Another criminal lawyer, Mr T.M. Sinnadurai of Regent Law, said that used panties would be considered used clothing, and selling them would not be a crime.

"But if it is attached with an obscene photo or video, then, yes, it is a crime," he said.

"Whether you sell or buy, the possession of obscene photos or videos is illegal and considered obscene publications."

Dr Brian Yeo, a consultant psychiatrist at Mount Elizabeth Hospital, said that the selling of used panties is purely a commercial transaction.

"They are selling a fantasy and it's just to make money," he said. "There's nothing special about it and it happens in Japan."

For buyers, Dr Yeo said the fetish might become a problem.

"There are more acceptable fetishes, like liking lingerie or high heels, which is fine so long as it doesn't take over one's life," he said.

"But there is a fine line between fetish disorder and preference. Purchasing used underwear is taking a leap from just having a fetish for underwear."

He said that the next step for buyers would be to steal underwear, at which point it becomes a problem.

"Buying used underwear creates a higher sexual tension, but the seller is still anonymous," he said.

"The next step is to steal underwear from acquaintances, people they can identify. Usually, people steal from neighbours or places like university hostels - it's common."

As for the possible demographic of buyers, Dr Yeo said there is no one type of person.

"We see all sorts who develop a disorder and it takes all kinds," he said. "It is not just the sad and lonely. It usually is just individuals who are vulnerable."