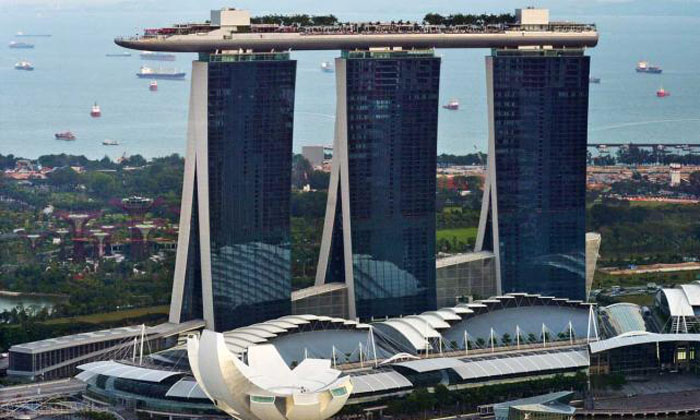 Water raining down from the ceiling sent a boutique in the lobby of Marina Bay Sands' Tower 3 scrambling to rescue its luxury bags, which would have been damaged if soaked, Shin Min Daily News reported.

Water also came down from the three lamps above the hotel's reception in the lobby, a salesman named Lim said of the incident which happened on Saturday afternoon.

According to a manager of MCM boutique - the only shop affected, the staff managed to save all the bags in time.

Shin Min noted that the more than 20 luxury bags shrouded in plastic to prevent them from getting wet were prized at more than $1,000 each.

"The lights in the store all went off when the water came down," Mr Lim recounted.

"The carpet was completely drenched. The five or six workers frantically removed the displays and wrapped them up to prevent damage."

A spokesman for the hotel said the water came from air conditioners but the reason for the leak is still being investigated. The leakage continued for almost half an hour.

The hotel's cleaning team later came to the boutique to remove the stains and dry the carpet.

Shin Min reported that workers were still repairing the lights above the hotel reception that evening.

Many patrons were disappointed when they found the boutique closed for a clean-up on Saturday.

But yesterday, when Shin Min revisited the shop, everything was back to normal, with the bags back in their original spots.

A shop assistant noted that water also splashed down on the cashier's counter and in the storeroom.

"We had to use buckets to contain the water," she said.

"Luckily, our stocks were all wrapped up. Otherwise, the damage would have been grave," she added.