Dad who was too engrossed in mobile game while feeding baby who choked: 'Nobody knows how I feel' 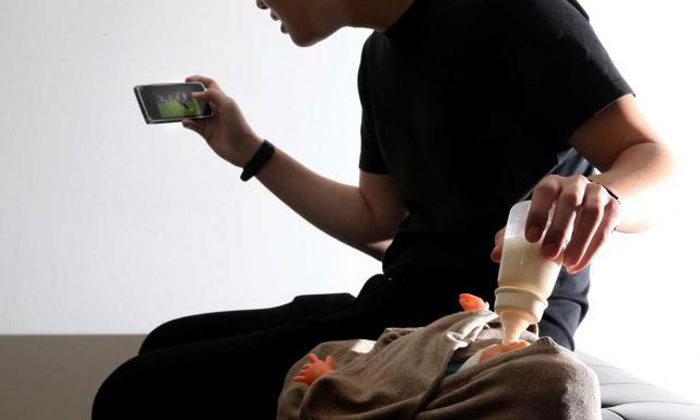 He was so engrossed in a game on his mobile phone, he would not stop playing it even when his wife asked him to feed their three-month-old infant.

He sat on a bed and placed little Reyhana Qailah on his lap. He then continued playing the game with his right hand while using his left hand to feed his daughter milk from a bottle.

His decision would prove fatal for her, a coroner's inquiry into her death was told yesterday.

Investigation officer Tony Won testified Mr Shiddiq was so engrossed in his game that he did not realise his baby had been thrashing about for two minutes before she apparently choked on the milk.

Even then, he still did not realise something was wrong until his father-in-law walked in and noticed that the baby was pale and motionless.

Several people tried to apply cardiopulmonary resuscitation (CPR) on Reyhana, but it was too late.

Mr Won said Mr Shiddiq was alone at the family's Telok Blangah Crescent flat when the tragedy occurred at around 10.20am last Oct 12.

About 20 minutes earlier, his wife, Madam Nurraishah Mahzan, 31, had made 180ml of milk and handed the bottle to him to feed the baby.

When he said the baby was rejecting the milk, Madam Nurraishah took over the feeding till about 10.15am, when she had to go for a urine test at Clementi police division.

She handed Reyhana (right) to Mr Shiddiq and told him to continue feeding their child.

As he tried to feed her while playing his game, Reyhana protested by kicking her legs and moving her hands, said Mr Won.

But he placed the teat inside her mouth and did not look at her or know what she wanted when she started crying.

Mr Won told the court: "(By his) own admission, he was so engrossed (with the game), he didn't pay any attention to his child."

Then the baby fell silent.

Around that time, Mr Shiddiq's father-in-law, Mr Mahzan Ahmad, returned from a nearby market and realised something was wrong.

When Mr Mahzan, 57, questioned him, Mr Shiddiq was unable to tell him what had happened.

Detecting a pulse on the baby, Mr Mahzan performed CPR on Reyhana, who vomited some milk. He also told his son-in-law to call for an ambulance.

Mr Shiddiq also sent his wife a WhatsApp message to tell her to return home immediately.

The desperate mother took Reyhana's limp body and performed CPR outside the flat - she thought there was more fresh air there.

A policeman and a paramedic also tried to resuscitate the baby when they arrived at the flat.

It was all in vain. Reyhana was pronounced dead at around noon at Singapore General Hospital.

An autopsy revealed the baby had previously suffered fractures to her right ribs and skull.

A pathologist reported that the old injuries would not have caused or contributed to her death, which was certified as "cardiorespiratory failure pending further investigations".

While the cause of death could not be ascertained, the final cause of death report mentioned smothering or suffocation and choking on milk as possible causes.

Her pacifier had dropped on the floor. When he squatted to pick it up with his left hand while holding Reyhana in his right arm, she fell backwards and hit her head, which he had not supported.

She was still crying even when she was taken to her mother at a friend's home in the block.

In hospital, Reyhana was found to have a fractured skull.

Mr Shiddiq kept silent about how his daughter had got injured.

Reyhana was discharged on Sept 9 after her mother agreed to a "discharge plan" set by an officer from the Ministry for Social and Family Development that at least two adults must accompany Reyhana at all times.

The condition appeared to have been breached when Mr Shiddiq was left alone with Reyhana that fateful day.

Mr Won said he had not.

He "revealed (the accidental fall) only after a few rounds of interviews" after Reyhana's death, the IO added.

A police spokesman told The New Paper that a voluntary polygraph test is not standard procedure but is "generally used when there are conflicting accounts provided by the persons involved and all other investigative leads have been exhausted".

Dad: Nobody knows how I feel

After the coroner's hearing yesterday, Mr Mohamed Shiddiq Sazali, 27, went to his Facebook page, Locca Locca, to share his grief of losing his daughter, Reyhana.

The page features Reyhana's portrait as a cover photo and a profile photo.

Below are excerpts of what Mr Shiddiq wrote in Malay:

"You want to tell the whole world that I don't know how to take care (of children). But in this situation, I did not intentionally do that (to her).

"I loved her like how others loved her too. But I loved her more than the love given by others. In this world, who doesn't love his own child?

"I deliver cargo for a living. When I'm in the lorry, I see families with their babies walking together and I feel sad. I almost tear, nobody knows what my heart feels. I just have to endure. God, please give me strength."

Aug 9: Reyhana put under observation for eight hours at KK Women's and Children's Hospital (KKH) after she vomits blood. No abnormality is observed after she is discharged.

Aug 26: Reyhana's father, Mr Mohamed Shiddiq Sazali, accidentally drops her at a void deck in Buangkok Crescent. She is warded at KKH after she is found to have a fractured skull.

Sept 9: Reyhana is discharged only after her mother, Madam Nurraishah Mahzan, agrees to a condition that Reyhana must be accompanied by two adults at all times.

Oct 12: Reyhana stops breathing while being fed milk by her father who is engrossed with playing a game on his phone. She is pronounced dead in hospital.

Related Stories
3-month-old baby dies while being fed by father who was playing with his phone
More About:
death
parent
phone
baby