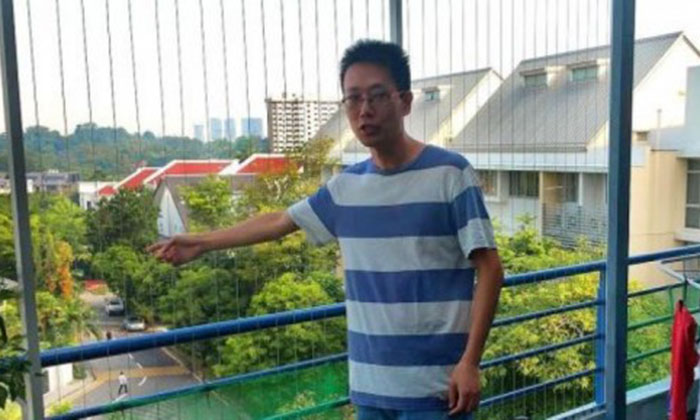 When he bought a $2 million double-storey penthouse at 19 Shelford condominium, off Adam Road, in February, he thought he had secured a good future for his two children because good schools are nearby.

Then, Mr Zou Xiang, 41, a software engineer, realised that the balcony of his fourth-storey unit did not have grilles.

Instead of a low wall, it has horizontal railings, which makes it easy for young children to climb up or slip through the gaps between the railings.

Realising the danger, he tried to protect his son, four, and daughter, three, by installing grilles on the balcony.

But the condo's management committee (MC) rejected his application and subsequent appeal.

When he tried to go ahead with the installation, the MC stopped the workers and even called the police.

At 5.30pm yesterday, the dispute took a surreal turn when the MC sent him a letter to tell him that his balcony has been classified as a "roof garden".

This came after Mr Zou wrote to the Building and Construction Authority (BCA) and was told that he should be allowed to install the grilles because his children's safety takes priority over design.

According to the MC's letter, since the balcony is a roof garden, the BCA by-law that structures and devices can be built on windows and balconies for the safety of children does not apply.

A shocked Mr Zou questioned how the 16 sq m balcony could be classified as a "roof garden" when it is on the lower floor of his two-storey unit, which has no access to the roof.

"I feel like they are playing a word game with me," he told The New Paper yesterday.

"Over the past two months, the term 'roof garden' has not once been mentioned to me. How can they be so unsympathetic towards the safety of children? This is too much."

When TNP checked with the BCA, its spokesman said: "Safety is important, especially where young children are involved.

"Therefore, owners shall not be prevented from installing any structure or device to prevent harm to children under the prescribed by-laws of the Building Maintenance (Strata Management) Regulations 2005."

Mr Zou first wrote to the MC on May 23, about a month before he moved into his new home, to seek approval to install the grilles.

What followed were several exchanges between them without approval being granted.

In July, the family had a close call when their domestic helper caught their son leaning precariously over the balcony's ledge while waiting for his father to return from work.

His horrified parents cable-tied sheets of green plastic mesh over the railings to prevent the children from climbing up.

Mr Zou said: "But it was not foolproof as my children could still fall over any time."

Then, on Aug 3, they read about a three-year-old girl who died about a month after falling from the balcony window of a fourth-storey flat in January.

That was the last straw for them. They decided to go ahead and install the grilles.

Mr Zou said: "We knew we were risking it by going ahead without permission. But we couldn't wait any more. While we wait, tragedy could strike at any time."

They hired a contractor to install four panels of "invisible" grilles across the balcony on Aug 17.

But that afternoon, after two panels had been installed, council members entered their apartment and stopped the workers. They confiscated the workers' visitor passes and called the police.

When TNP approached the condo's MC on Tuesday, the managing agent said that only council members could comment and he would try to get a response from them.

But there was no response by press time last night.

Mr Zou said he has lost sleep over the dispute and will rush home after work to make sure his children are safe.

His wife also calls their helper at least three times a day to ensure the children stay away from the balcony.

Mr Zou said: "Previously, I could work peacefully, but now I am constantly worried about my children while at work."

Mr Zou has contacted his Member of Parliament, Ms Sim Ann (Holland-Bukit Timah GRC), for help and was told that he should raise the matter again at the next general meeting and try to settle the dispute amicably.

When contacted by TNP, Ms Sim said: "At times, condo residents approach me concerning disagreements with their MCs.

"In such cases, we would speak with the MC to understand their side of the story and see if the issue can be resolved.

"If both sides think we can be of help in facilitating further discussion, we are always glad to try."

May 23 Mr Zou Xiang sends an e-mail to the management committee (MC) under the Management Corporation Strata Title (MCST) about installing grilles on his balcony.

May 25 The MC rejects his request without offering alternative measures.
When he appeals, the MC tells him to seek approval from council members of the condo. His e-mail is forwarded to them.

May 27 The MC requests detailed drawings of the installation for consideration. Mr Zou submits the drawings a day later.

June 18 Mr Zou moves in with his family and is told by the MC that his appeal will be brought up at a general meeting on June 23.

June 24 The MC says the council members need to seek approval from the relevant authorities.

July 4 Mr Zou does not receive approval and writes to the Building and Construction Authority (BCA).

July 8 BCA advises him to check with the MC for its reasons for the rejection.
BCA also informs him that he can seek legal help to apply to the Strata Titles Board, but he opts not to do so.

Aug 17 Mr Zou tries to install the grilles, but the MCST stops the workers.

Aug 20 The MC issues a warning letter notifying Mr Zou that he had not received permission to begin renovation works, and seeks his cooperation to remove any installation done to the balcony on Aug 17.

Aug 25 The MC issues a letter notifying Mr Zou that his balcony is classified as a "roof garden".

The safety of children is paramount, especially where young children are involved, says the Building and Construction Authority (BCA).

Its spokesman told The New Paper yesterday: "A subsidiary proprietor or occupier of a lot shall not be prevented from installing any structure or device to prevent harm to children under the prescribed by-laws of the Building Maintenance (Strata Management) Regulations."

"MCST cannot make decisions that are contrary to the BMSMA prescribed by-laws," he said.

But he added that they are allowed to prescribe a certain style or design to achieve some uniformity of facade in the condos.

A BCA spokesman said: "The MC should put in place a set of design guidelines, which could be passed as a by-law at a general meeting, and subsequently adopted by the residents.

"If there are no design guidelines, the MC should consider requests for the installation of such structures or devices on a case-by-case basis by taking into account the safety of the residents, especially children, which must take priority over other considerations such as design and aesthetics."

Earlier this year, The Straits Times reported on a family who won a legal case to install grilles in their condominium unit.

Dr Sujit Singh Gill was twice refused permission by the management corporation of One North Residences to install grilles in his 13th-storey unit.

When he applied to the Strata Titles Boards (STB), it ruled in favour of his family on the grounds that children's safety must be paramount, even if the grilles may affect the appearance of the building.

Mr Toh and his colleague, Mr Daniel Chen, who represented Dr Singh, said that owners who have problems getting approval to install grilles in their homes should seek legal help to apply to the STB.

Mr Chen said: "It may take some time for the owner to get the outcome they desire through the legal process, but if the council of the condominium is resolute in its refusal to permit the installation of grilles, this is the only way to compel them to allow the installation."