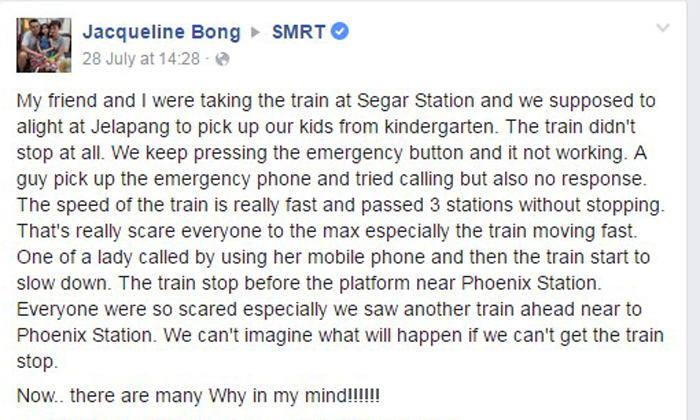 A woman has written to SMRT on Facebook about how an LRT train she was on apparently did not stop at the station where it was supposed to.

According to Jacqueline Bong's post dated July 28 on SMRT's Facebook page, she and a friend had boarded the LRT train at Segar Station and wanted to alight at Jelapang Station.

However, the train apparently "didn't stop at all", she said.

She wrote, "We keep pressing the emergency button and it not working. A guy pick up the emergency phone and tried calling but also no response. The speed of the train is really fast and passed 3 stations without stopping. [sic]"

The train eventually stopped "before the platform near Phoenix Station".

She added, "Everyone were so scared especially we saw another train ahead near to Phoenix Station. [sic]"

SMRT has since responded to Bong's allegations on the same thread and said, "Hi Jacqueline Bong, we apologise for your experience. Rest assured that we treat this incident seriously and we will investigate it. Thank you."

See screenshots of the posting in the gallery.