Carcass of dolphin washes up on East Coast Park beach 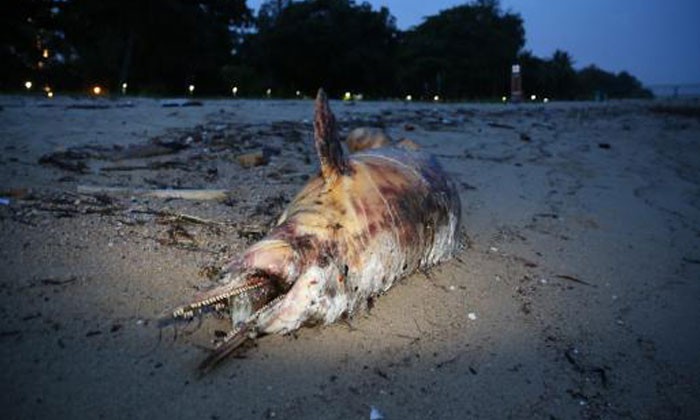 Dolphin sightings in the Singapore Strait are quite rare, and it was even more unusual to see a dolphin carcass washed up on the beach at East Coast Park on Wednesday.

By Thursday morning, a three-member team from the National Parks Board (NParks) had erected a cordon around the 2m-long carcass located near Big Splash, The Straits Times reported.

The dolphin was later taken away on a lorry after an assessment by staff from the Lee Kong Chian Natural History Museum and NParks.

In 2015, a dead sperm whale washed up on Jurong Island. $1.3 million was later raised for scientific and education efforts related to the sperm whale. Its skeleton was preserved at the Lee Kong Chian Natural History Museum, which is part of the National University of Singapore (NUS).

A dead dolphin was also sighted at East Coast Park in 2014.

Between 2009 and 2011, at least 169 dolphins were sighted in Singapore, according to the National University of Singapore's Tropical Marine Science Institute, which has been conducting sporadic studies on the mammal over the past 20 years.

These marine animals are usually spotted near the Southern Islands, which is also home to Singapore's first marine park.

In 2015, a pod of six Indo-Pacific bottlenose dolphins were spotted by bird watchers in the Singapore Strait while they were doing their pelagic bird survey.

In the same year, the Animal Concerns Research and Education Society (Acres) launched a two-year study on wild dolphins in Singapore.

Acres will also explore the possibility of conducting wild dolphin-watching tours in Singapore.