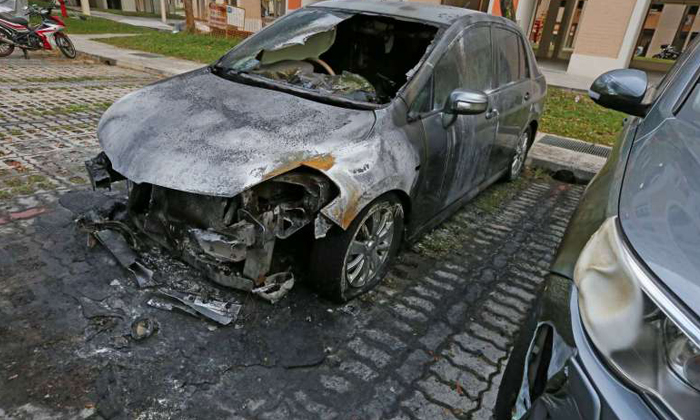 SINGAPORE - A car at an Ang Mo Kio carpark ended up a blackened heap after it caught fire spontaneously on Tuesday (Oct 4) afternoon.

No one was injured in the incident, the Singapore Civil Defence Force (SCDF) said.

The fire, in the engine compartment, was extinguished using one water jet and a fire extinguisher.

Residents near the block said that they heard several loud bangs as the car burned, Shin Min Daily News reported.

There were burn marks on a lorry and a car which were parked next to the burning car, the report added.

This is the third report of a car catching fire in an HDB carpark in four days.

On Sunday morning, the SCDF was called to extinguish another car fire at an open carpark around Block 464, Tampines Street 44.

The fire, which occurred at about 4.40am, was extinguished using one water jet.

At about 6.20pm on Saturday, a car parked at Block 149, Woodlands Street 13, also caught fire. It was also put out with one water jet.

No injuries were reported in both cases.

It is not known what caused the fires, but parked cars can combust suddenly if there is a short circuit, Mr Joey Lim, 50, Managing Director of Harmony Motors told The Straits Times.

“If car is already at ambient temperature and there is a fire, it is most likely caused by the short circuiting of electrical components,” Mr Lim said.

When wires lose their insulation, they sometimes rub together, resulting in electrical flow. It may take a few minutes or hours for the heat to build up to a fire, depending on the damage, he said.

Another possible scenario is that the car had just stopped running, and was still hot when something highly combustible came into contact with it, said Mr Lim.

All three fires are under investigation, SCDF said.