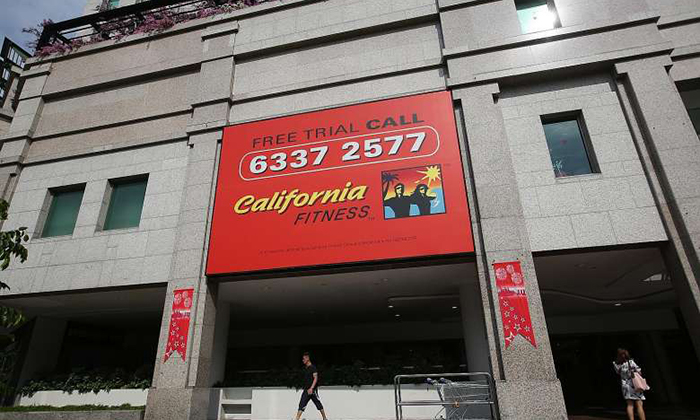 The firm that owns California Fitness was already $21.7 million in the red in January last year, but that did not stop the gym chain from signing new members and getting them to pay their fees up front.

That is how owner JV Fitness kept the chain going despite money troubles, until the chain's closure last month.

Around 27,000 members are now owed $20.8 million in unused gym access and unredeemed personal training sessions, it was revealed in a liquidation report presented to court yesterday. The debt forms most of the $30.8 million which the chain's owner is liable for. JV's total assets on record are worth $5 million and include rental deposits paid to its landlords.

Financial statements also show that for years, JV has been accumulating losses, which stood at $25.6 million by the end of June this year.

Liquidator Tim Reid, describing the losses as "staggering", said: "The members who paid in advance... have every reason to be annoyed." He added that there is "no prospect" of getting back their money through any asset sale. After the chain closed its Orchard branch in February, the gym equipment was sold for just $20,000, he explained.

Members were shocked to hear that the gym had been losing money since 2013, and asked why it was allowed to continue selling packages.

Consumer watchdog head Seah Seng Choon called for the authorities to look into what he called a questionable practice. Said the executive director of the Consumers Association of Singapore: "Case will discuss with the ministry and the relevant stakeholders to look into protection for consumers' pre-payment."

In the liquidators' report, Mr Reid and his colleague Theresa Ng said the way the firm obtained payments in advance when it was clearly insolvent "warrants further close review".

Lawyer Lionel Tay, who acts for the liquidators, added that they will also be investigating all potential breaches of the Companies Act or any other law.

When California Fitness shut its Orchard branch six month ago, leaving it with three other outlets at Raffles Place, Bugis and Novena, it said it was a strategical business decision. Last month, after all 12 California Fitness gyms in Hong Kong were shut due to debt, a spokesman here would only say that the Singapore chain operated separately.

But on July 16, California Fitness announced that it had closed the Raffles Place branch and directed its members to the Novena and Bugis outlets. Shortly after midnight on July 20, the liquidators, who were appointed just hours earlier, announced all outlets were closed.

Property valuer Lai Kin Hoow, 32, who used only two years of his seven- year package worth over $5,000, said there were no signs that the gym had been facing mounting debts.

Another member who paid $1,700 for a 26-month package just nine days before it closed has given up hope of getting her money back. "Going forward, I hope more can be done to protect consumers," said the 38-year-old woman who works in a logistics firm and wanted to be known only as Ms See.

Lawyer Amolat Singh said it would have been up to JV's directors to make the call to stop taking in members. "If the directors continued to trade and operate when the dark clouds had clearly gathered on the horizon, that could potentially make the directors personally liable. Then again, that would be cold comfort to the members as the directors may not have the financial muscle to satisfy all the debts."

Last month, it was reported that two senior California Fitness executives in Hong Kong had been arrested by the authorities there. They are suspected of infringing Hong Kong's Trade Descriptions Ordinance, which takes to task traders who promise goods or services when knowing they cannot deliver.

Meanwhile, when asked about news that it is opening a new gym at Bugis Junction, Fitness First made it clear it is taking over the space vacated by the Shaw Theatres cinema, and not California Fitness.

1,468 members have filed proof of debt forms to make claims

Related Stories
California Fitness shuts down all outlets in S'pore: Some lose about $5,000 as refunds are unlikely
More About:
debt
scam