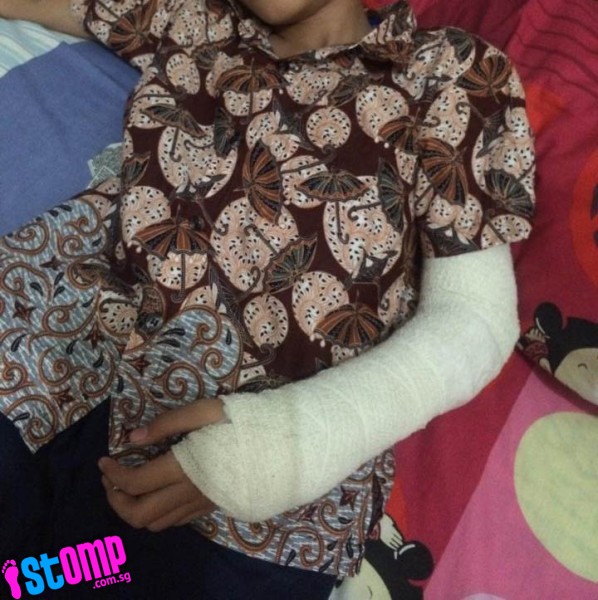 A Stomper is frustrated by the way her son's school is handling a case of bullying that left her boy with multiple fractures.

In a phone conversation with Stomp, she related that she had been called to her son's school after her son was apparently hurt in a fall.

Her son had suffered multiple fractures in his arm near the elbow, leaving him unable to move it properly.

She had arrived to find her boy crying. He had been so scared at the time that he was unwilling to say what had happened to him, but eventually said that he had been caused to fall by a bully.

This was in fact the fourth time that her son had complained about being targeted by the same bully.

At the time, she had been surprised that her son had not been sent to hospital directly by the school, and that she was forced to bring him there for treatment herself.

In addition, she has had to foot the bill of $100, which is to be followed by a number of follow-up treatments.

In order to resolve the matter, she had asked to meet the parents of the pupil involved, but they had declined to speak with her.

Staff at the school had also stated that it was against school policy to provide her with the contact details of his parents.

Frustrated by the school's inability to facilitate a resolution, the Stomper said: "I sent my boy to school to learn, but he has come back to me injured. And worse, no one seems to want to take responsibility for it."

She says, "This is not about getting compensation for the incident. The school just seems to want to move on.

She added, "My reasons for highlighting this is to warn other parents -- this could happen to you too, and any parent in this situation would want to make sure her son is ok."