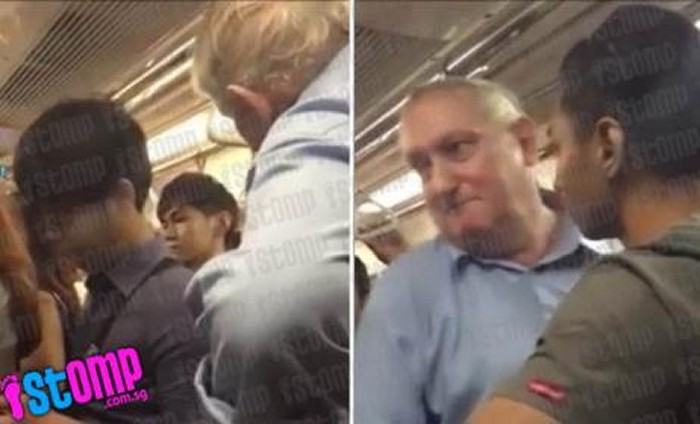 A brave man stood up to an unreasonable commuter who was threatening a teen for wearing a shirt with offensive words on it.

Stomper Nabilah witnessed the incident and alerted Stomp to it.

According to her, the T-shirt said: "I'm F--king Special”

In an email to Stomp she wrote:

"A teen was being insulted by a man because of what his T-shirt said.

"It was not a good day for everyone due to the MRT breakdown and the train was very packed.

"Suddenly, a man in blue shirt came in the train shouted and threatened teen asking if he wanted to fight."

She added that the teen just kept quiet and did not respond to the man.

From the video she sent in, the aggressive man even threatened to throw the teen out of the train when it reached Ang Mo Kio MRT station.

Fortunately, a brave man by the name of Elfy stood up to the angry old man and the teen was left unharmed.

The old man then exited the train after being confronted by Elfy.

Several police officers and an SMRT personnel were also at the train platform when the man exited the train.

Nabilah said: "I am proud there is someone who actually stand up for others! Great job Elfy!!"

What do you think of Elfy's selfless act? Was it right for the commuter to threaten the teen because of his offensive shirt?

Let us know your thoughts in the comments section below.