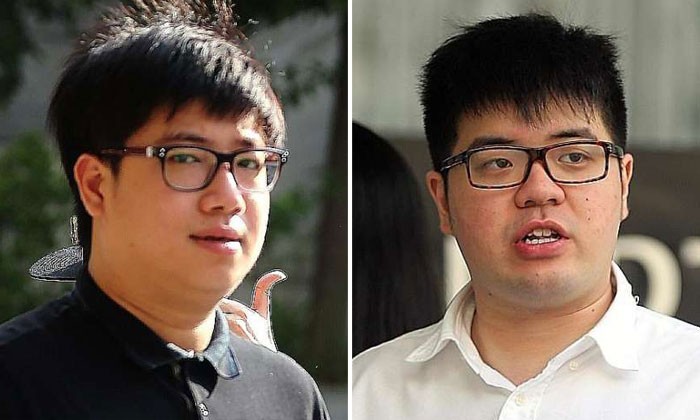 Two friends who raced each other along a stretch of road in Seletar in the early hours of New Year's Day last year were jailed, fined and banned from driving for dangerous driving and taking part in a competition without a permit.

Ryujin Tan, 26, and Gordon Tan Zhi Liang, 27, had each admitted to two charges of racing and dangerous driving along Seletar Link towards Punggol Way.

Two other charges were considered during sentencing.

Gordon, a manager, and Ryujin, whose occupation is not known, were each sentenced to three weeks' jail, fined $6,600 and banned from driving for 18 months yesterday.

Deputy Public Prosecutor Selene Yap said Ryujin, who was driving his aunt's blue Nissan GTR, and Gordon, who was behind the wheel of his mother's red BMW, were at Yishun Dam on New Year's Day last year when they decided to race.

At 2.07am, someone from Ryujin's car shouted "Battle of the Twin Turbos'' . One of Ryujin's two friends gave the countdown from five to one to indicate the start of the race, and shouted "go''. The two cars took off at high speed.

During the race, they made an illegal U-turn, changed lanes and moved in between lanes.

Ryujin then drove at a high speed on the extreme right lane of Seletar Link towards Tampines Expressway back to the start point. Both drivers made unauthorised U-turns and repositioned their cars at the start point.

They raced again at 2.12am after Ryujin's friend counted down from five again. After about 800m, at a gap, both cars made unauthorised U-turns and continued to race back to the start point.

A Traffic Police officer, who was part of a group of officers on an operation to detect illegal racing activities along Seletar Link, captured the speed of Ryujin's GTR using a laser gun and found it travelled at 146kmh over a distance of 191.5m.

A video of the two races was played in court on Thursday when the duo pleaded guilty.

Ryujin's lawyer, Mr Desmond Tan, said in mitigation that no real hazard was caused to anyone that morning, and that the only "spectators'' present were his client's wife and friends. He said his client acknowledges that he had made an error in judgment by deciding to compete with the co-accused in a bid to determine who had the faster car.

Gordon's lawyer, Mr Mohan Das Naidu, said his client was remorseful. Both men wanted to have some fun with their cars and hence decided to compete against each other.

Gordon's father, who was in court with a friend, and Ryujin's wife declined to comment.