Bird embryos, frogs and 'faeces': S'pore gatecrashers share crazy stuff they had to do for their groomsmen 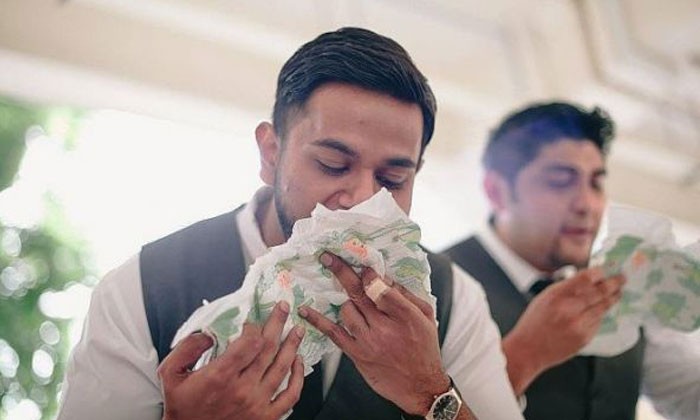 Take up the challenge and prove your love for the bride, say the bridesmaids.

And often, the challenges are accepted by the sporting groom and his band of "brothers" – it does not matter how awkward or embarrassing the tests can get.

Take the case of the groom and his groomsmen trying to retrieve a gummy worm from a bowl of live worms.

The video of the incident went viral and prompted criticism from netizens.

How far can such activities get?

Madam Ayra Quek, 29, recounts how her husband and his nine groomsmen had to eat from a diaper each at their wedding in February.

A concoction of Nutella chocolate and condensed milk, which was made to resemble faeces, was smeared on the 10 diapers.

Mr Amienuddin Abu Bakar, 29, and his entourage had to bury their faces into the diapers and polish them off.

They then lined the diapers which had letters attached to them to spell out "Amien (heart) Ayra".

Madam Quek, a sales executive, says she only learnt of it during the wedding reception.

"When I first watched the wedding video during the dinner reception, I kept saying 'Oh my God'," she says.

"But I was really touched."

Madam Quek adds: "My husband and the groomsmen were sporting."

She reveals that there was a slight culture shock for the men at first.

Of the nine, one is Chinese, another Malay and the rest are Indian.

Madam Quek says: "Because my husband and most of the groomsmen are not Chinese, it was their first time experiencing a Chinese wedding gatecrash. So they did not know how it worked."

Madam Quek, who is expecting a baby girl next month, adds: "My husband and his groomsmen actually finished all of the things that the bridesmaids made because they did not know that most of the time, people would just dump the food away or play cheat.

"They did everything perfectly.

"All of them took it pretty seriously and they did not know that the games were just to disturb them."

The men also had to shake off clothespins from their bodies and faces while dancing to music.

Madam Quek says: "They may have received a low score for the games but I know my husband loves me very much."

He'd eat anything to show his love for her

When Mr Anthony Levi Kho went to pick up his bride, he and his groomsmen were asked to eat balut - boiled, developing bird embryo in the shell.

Mr Kho, 36, says: "The smell of the balut was like a morgue. I have been to morgues before and they smelled exactly the same. I remember I could taste and feel the feathers in my mouth when I was eating it."

The details remain fresh in his mind even though his wedding was in 2004.

Mr Kho says with a laugh: "It tasted horrible, like it was rotten. I can still remember how the membrane tasted like. That night, I kept burping and it smelled really bad. I puked a lot too."

Still, the experience was a sweet one for Mr Kho.

"I just wanted to show my wife that I love her. It was all for fun.

"On top of that, there were videos shot so we can look back at all of these experiences," he says.

"When my wife saw the video (during the dinner reception), she said 'wow, so ke lian (Chinese for pitiful)' but I suspect she was a bit xing zai le huo (Chinese phrase for taking pleasure in another individual's pain)."

In his 16 years as a wedding photographer, Mr Kho says he has seen 80 per cent of grooms go along with the games. But he feels the best way to ensure that everyone has a good time is to make prior checks.

"The wife will know the limit best but another way to do it is to check with the elders, because some of the bridesmaids may go on revenge mode and plan games that really cross the line," he says.

"I don't think there's a fixed line because it all depends on the couple."

He has seen grooms who argue with the bridesmaids during the wedding gatecrash, but he has also seen those who go the extra mile to make their special day even more memorable.

Mr Kho says: "I think it depends on the groom. Some do not believe that winning these games will make their wives happy.

"But at the end of the day, (the games) are just for people to laugh and open up to one another and it really can be quite fun."

The groom and his band of brothers had to put their hands into three boxes and guess what was inside them.

Miss Khoo says: "The guys were all very sporting and it was very funny to watch. But there were some who wanted to siam (Hokkien for avoid) the challenge."

After the wedding, the bride even gave the frogs to her niece to keep as pets.

The men had to eat instant noodles, mixed with peanut butter, from plastic potties.

She feels "it would not be going too far if both sides, the guys and girls, are okay with it".

She says: "So far, I have never had any couples who quarrelled over the games. I think everyone just does it out of fun."