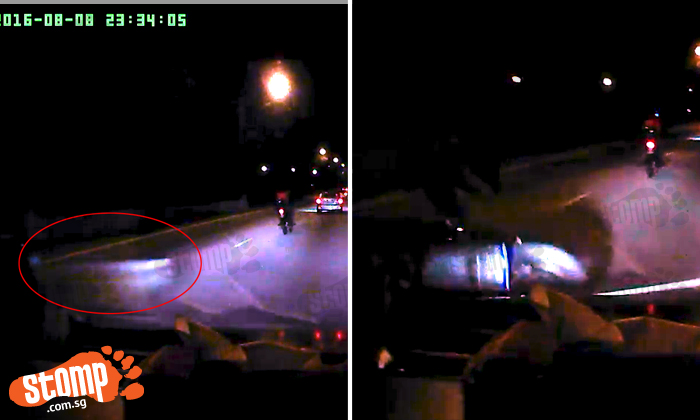 A motorcyclist was sent flying after he could not avoid an object lying on the road along the Bukit Timah Expressway (BKE) on Aug 8.

Stomper ZH sent in a video of the incident captured on his car's dashboard camera.

According to the Stomper, he was travelling along along BKE towards Woodlands Avenue 12 at around 11.30pm.

In the clip, it was dark and the unidentified object was lying on the left lane. One biker managed to swerve to avoid it, but the second biker could not do so in time.

"It seem like a wood on the road that caused the biker to lose his balance, was not fast enough to react to avoid collision with him.

"When I parked my car, alighted and walked back towards him, there were around 6 to 8 people stop by the side and attended to him. I believe those that were behind us saw, stopped and helped him.

"We help to shift his bike to the side, knowing ambulance was already on the way.

"He was injured but life was not in danger, I left shortly after that since there were already so many people on scene attending to him."