Alleged bullying at ITE College Central: Student tries to hit youth with hockey stick, then punches him over dispute 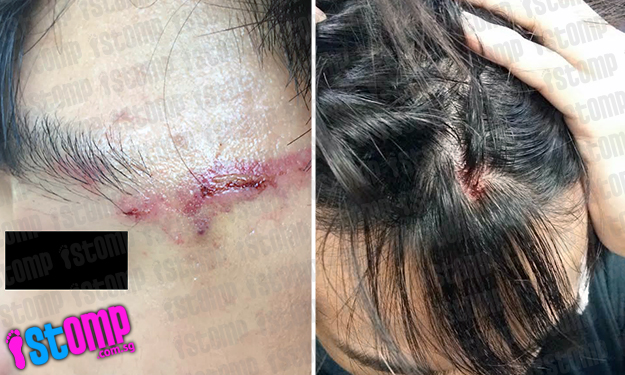 A Stomper was allegedly punched by a student over a Whatsapp chat dispute in ITE College Central on Thursday (Oct 8), leaving with injuries on his head and above his eyebrow.

The Stomper said this student was unhappy over comments made on a group chat on Whatsapp, and confronted him with a hockey stick in hand. "He is not a hockey player, and got the stick from his friend," said the Stomper.

Deciding that he did not  want to retaliate, the Stomper went to the Student Activities Centre (SAC) to make a complaint, but was asked to look for the Student Guidance Officer (SGO).

But the student ended up hitting the Stomper's classmate on the forehead instead. "He also tried to provoke me to hit him back, but I refrained from doing so," added the Stomper.

The Stomper's aunt, who wrote in to Stomp about the incident, said that her nephew sat in the office and wrote a report on the incident while bleeding from his wounds.

After this, the Stomper's form teacher brought him and his friend to a clinic nearby. "While he was in the clinic, he received a message from the student saying that he would outside the school for my nephew if he got expelled."

The student was reportedly asked to assist in investigations that day, but was sent back to class. "My nephew was asked to go home to prevent further disputes," said the aunt.

"Why must he sacrifice his studies for the day and be sent home when the bully gets to stay in class," she added.

She has since helped the Stomper's mother to file a police report and write to the Minister of Education on the incident.

"Actually the school rule is that if anyone fights in school, no matter who started the fight, they will get expelled. Even when you're being assaulted you can't fight back or else you'll get expelled too."