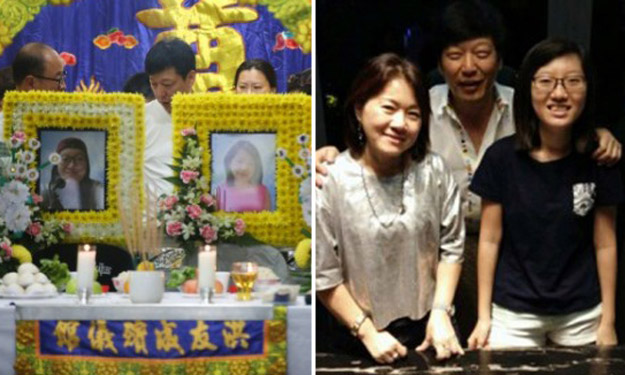 His wife survived an operation for a benign brain tumour five years ago. His daughter recovered from tuberculosis four years ago. On Sunday night, in one devastating blow, both were killed.

It was, said Mr Robin Poon, 50, a "stupid accident" that should not have happened. His wife, Madam Cecilia Yep Lay Choo, 51, and their only child, Kimberly, 22, died when their Mercedes E250 plunged into Alexandra Canal.

Stomper David sent photos of the incident that happened at about 9pm on Jan 24 via Stomp's WhatsApp, and Stomper Anishar sent in a video of rescue personnel in action, trying to retrieve the bodies from the canal.

"(On Sunday night), I couldn't cry because I just couldn't get myself to accept the fact that the two hours (I left them alone) made so much difference.

"Only today, I saw that it's a reality. No more miracles already," he told The New Paper, referring to his wife's and daughter's earlier health scares.

"I feel so lost," a visibly distraught Mr Poon added, in between making funeral arrangements for his wife and daughter.

Madam Yep, who was in the logistics and transportation industry, was behind the wheel when the tragedy occurred.

"It's really ridiculous because, with my wife's driving skills, this kind of thing should not have happened," said Mr Poon. The car workshop owner recalled the series of events before the tragedy.

The family had lunch at Hotel Vagabond at Syed Alwi Road, followed by a foot massage, before they parted ways.

Madam Yep and Kimberly drove off to continue shopping while Mr Poon met his friends for dinner in another car. "It's so sudden. I left them for dinner at about 6pm, and then the next minute..." he said, his voice trailing off.

"I just can't accept the fact that they were there (lying on the ground, dead)," he said. When the police called him about the accident, he tried to prepare himself mentally for what was to come.

"I asked (the police) how bad, but they just told me to go down as soon as possible... "I immediately tried to call my daughter and wife. But both phones were turned off. I immediately knew something was really wrong."

That night, Mr Poon could not sleep. "I spent the whole night thinking about what had happened," he said. He revealed that the family of three had planned a short trip to Macau over the Chinese New Year holiday.

Such family holidays are a rarity, partly because of Madam Yep's busy schedule. "She's a super hardworking wife... She can't stop working," Mr Poon said. As a result, the semi-retiree often travels alone.

Sometimes, his "only princess" Kimberly tags along. "She has common interests with me. I can even go on a Bangkok shopping trip with my daughter, just the two of us.

"We just go cafe-hopping and shopping. She knows I like desserts, so she would go and check (on a list of places to go to)," said Mr Poon wistfully. He added that Kimberly was a nice and simple girl who bore no grudges.

"All her cousins love her because she bears no grudges. One of her cousins studying in Oxford is flying back from the UK tonight," Mr Poon said.

The wake is at Block 414, Woodlands Street 41, and the funeral will be held on Thursday. . As for Mr Poon's plans after the funeral, all he said was: "I really don't know. I've got no direction at all."

For the past 24 hours, Mr Robin Poon, 50, has been racking his brain for answers. What could have caused the accident that killed his wife, Madam Cecilia Yep Lay Choo, 51, and their only child, Kimberly, 22?

Madam Yep's silver Mercedes E250 convertible had plunged into the Alexandra Canal through a gap between a lamp post and a blindspot mirror.

Mr Poon, a car workshop owner, is confident that the three-year-old car had no mechanical fault. "I drove the car when we went out for lunch and nothing happened," he said.

Mr Poon, who has been in the car repair business for 30 years, added: "My entire family is very much into cars. Even my wife is very interested. We are always very sensitive (to cars) and our car maintenance is always tip-top."

And he does not doubt his wife's driving skills, given her driving experience of more than 20 years. "My wife, she's fantastic. She can even drive a lorry... She has never had an accident before."

Madam Yep works in the logistics and transportation industry. She had been driving the Mercedes E250 on and off since the family bought it three years ago, but only started driving it regularly in recent months.

"I really don't see any reason (that the accident could have happened)," Mr Poon said. At one point, he even suspected foul play, he confessed. But the police later told him they had ruled it out, he said.

"I think it's some 'forces' at work. It's still a mystery. "I just want to know what actually happened, but nobody can help us," he said with an air of resignation.

Bollards, or short vertical posts made of material such as metal or concrete, can be put up by the roadside as a way to prevent similar accidents from happening.

Speaking to The New Paper yesterday, Mr Lee Swee Thin, who was the officer in charge of the Road Safety Branch of the Traffic Police from 1986 to 1989, said such bollards could be similar to the ones found at bus stops.

His suggestion follows Sunday's accident in which a mother and daughter were killed.

Their car had emerged from the basement carpark of Valley Point Shopping Centre in River Valley Road, and then plunged into Alexandra Canal, about 20m away.

The vehicle had mounted a kerb and cut across a footpath before it fell into the 2m-deep water.

Mr Lee, who is now managing consultant at Top Criminal Justice Consultancy, said: "Bollards will not only help save the lives of the people in the vehicles, but they can also protect pedestrians on the footpath."

A resident in a nearby condominium, who wanted to be known only as Mr Tan, agreed.

The 45-year-old businessman said: "You must make a sharp right turn when you get out of the carpark if you want to head towards River Valley Road.

"In case a driver slips up, bollards would definitely prevent more serious accidents from taking place."

"We extend our heartfelt condolences to the family of the victims. We are assisting the police in their investigation into the incident and are not in a position to provide any comments on this incident."

Two dead after crashing sedan into canal along Delta Ave

Man at a loss after losing wife and daughter in Alexandra Canal accident: 'She was an experienced driver'

Two dead after car plunges into Alexandra Canal: Mother and daughter were shopping before accident​

Man who lost wife and only child overnight in Alexandra Canal crash: They were both my princesses

Man who lost wife and only child overnight in Alexandra Canal crash: They were both my princesses

Alexandra Canal tragedy: Man at a loss as he makes funeral arrangements for wife and daughter