'Abnormal' prawns sold in Sengkang wet market, AVA probing if they are injected with gelatin 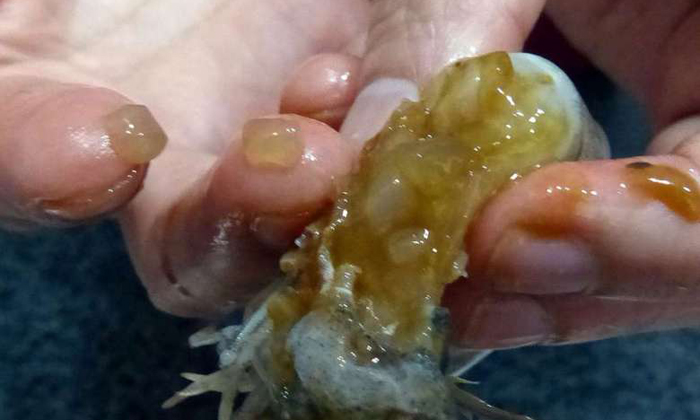 The Agri-Food and Veterinary Authority (AVA) is investigating a complaint about a substance found in the heads of prawns purchased from a Sengkang wet market last week.

It is looking into whether the sale weight of the crustaceans was artificially increased by injecting gelatin in them.

The 40-year-old woman who bought them, who wanted to be known only as Madam Huang, discovered the translucent blobs while cleaning 25 prawns she had bought from a stall at Rivervale Plaza.

After she placed the prawns in boiling water, the blobs hardened into a solid white "rubber-like" substance, she told The Straits Times.

Alarm bells rang as she had recently read an online article about seafood suppliers in Vietnam who inject prawns with gelatin-like chemicals to increase their weight to sell them at a higher price.

The Singapore permanent resident, who moved here from Guangdong, China, said in Mandarin: "In my home town, it is common for suppliers to illegally inject substances into prawns and sotongs. That is why I noticed the blobs."

It was her first time encountering "abnormal" prawns.

Prawns in Singapore are sourced from countries such as Malaysia, Indonesia and Vietnam.

An AVA spokesman said: "As part of AVA's food safety programme, imported prawns and shrimp (fresh or frozen) are monitored and sampled for food safety and compliance with our standards and requirements."

Its sampling tests cover a wide range of chemical contaminants and microbiological hazards, including pesticide residues, drug residues such as antibiotics and hormones, and microbial hazards such as salmonella.

"Food products that fail our inspections and tests will not be allowed for sale and enforcement action will be taken," the spokesman added. This includes the destruction of the product, licence suspension and import restriction.

The stallholder who sold Madam Huang the prawns told Chinese newspaper Lianhe Wanbao that he had bought the prawns from wholesalers, and it was the first time this had happened in more than 10 years of running his business.

Mr Lee Boon Cheow, president of the Singapore Fish Merchants' General Association, said he had not heard of such a case here.

Supermarket chain FairPrice said: "We wish to assure our customers that we work closely with AVA on this matter and do not stock any food that has not been approved by the authorities."