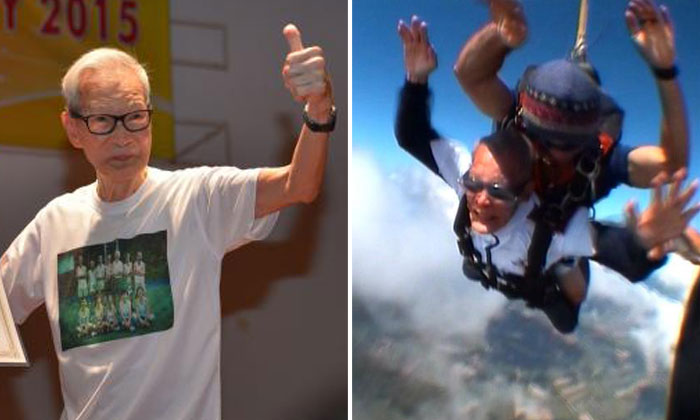 He leapt out of a plane and into the record books as the oldest Singaporean to skydive.

He did it to celebrate his 90th birthday.

It was Mr Tan's fourth skydive, his first being in 1996. He is currently listed as the oldest skydiver here in the Singapore Book Of Records.

The world's oldest skydiver on record is Canadian Armand Gendreau, who was 101 when he made the jump.

Mr Tan, a fitness advocate who started the jogging club Tiong Bahru Garden Joggers when he was in his 50s, said in Mandarin: "After that first experience (skydiving), I wanted to encourage other people to jump too. My family is closest to me and they were the easiest to persuade."

To have all his family members jumping out of the same plane with him was Mr Tan's dream. Having it come true on his 90th birthday made the whole experience even sweeter.

He said: "Having everyone rush over to (Wollongong) to celebrate my 90th birthday by skydiving together made me very happy.

"Some less courageous ones overcame their fears to jump with me and make my birthday a happy one. I really respect them. They dared to jump just to celebrate my 90th."

Mr Tan, who sees himself as a role model for Singaporeans to look up to, does not find skydiving scary. It is all about perspective to him.

He said: "Crossing the road can be dangerous, too. Accidents occur, don't they? In fact, there might be fewer skydiving-related accidents. I want to show Singaporeans that we cannot back away from things just because we are afraid, or because that thing is dangerous.

"How can a society function if we are all too afraid to step out of our comfort zones?"

Mr Tan considers skydiving to be a valuable experience as it forces people to overcome their fears. "After you've tried skydiving, you'll feel like a different person, because you dared to do something that you were afraid of."

And it seems like a thirst for adventure runs in the family.

His son, Mr Tan Yong Keng, 66, and grandson, Mr Tan Jinyi, 32, are no strangers to skydiving. Wollongong was their third time skydiving.

Mr Tan Jingyi, an architect, said: "Jumping as a family made it special, especially when you see people you never imagined jumping actually jump."

His fiancee, Ms Fiona Sng, 28, was the youngest member of the group to skydive.

She said: "I was quite apprehensive at first, but it turned out to be very fun."

Mr Tan Jingyi said: "You get this rush of adrenaline and endorphins. So when you land, you feel very happy.

"The scariest part was when they opened the door and you could feel the wind rushing in. But it only lasted about three seconds."

When the oldest Mr Tan is not skydiving, he spends his days with his basketball team and jogging club. Although an old knee injury sustained from playing basketball prevents Mr Tan from continuing with the sport, he does not let it stop him from exercising.

From Monday to Saturday, Mr Tan does push-ups and sit-ups while his basketball team plays in the mornings, and he brisk walks to Tiong Bahru Park to meet his jogging club in the evenings.

He joked: "I go to 'mark attendance' and see who hasn't turned up."

Afterwards, he takes them to a nearby coffee shop for a drink and some food.

When asked about his next big adventure, Mr Tan laughed and said: "What could I feasibly do at this age that is more exciting than skydiving?"

But he added: "As long as my body is strong enough, I don't see a problem with skydiving a fifth time."

I want to show Singaporeans that we cannot back away from things just because we are afraid, or because that thing is dangerous.

2006, aged 81: Second skydive, also in Cairns. He was later awarded a certificate for being the oldest person here to skydive by the Singapore Book of Records in recognition of this jump.

2014, aged 89: Third skydive, New Zealand2015, aged 90: Fourth skydive, and the first with three generations of his family, in Wollongong, Australia

Almost everybody can do a tandem skydive

The tandem jump that Mr Tan Kok Sing did is one in which the skydiver is attached to an instructor, who guides the skydiver throughout the entire process, said Mr Danniel Lee.

Mr Lee is an experienced skydiver here. He earned his instructional ratings from the United States Parachute Association (USPA) in 1996.

"It is the quickest way to do a freefall jump from a plane. The skydiver is taught the basics and the tandem instructor does the rest," said Mr Lee.

Director of sport promotion at USPA Nancy Koreen said: "Almost any able-bodied person can do a tandem jump. As special accommodations can be made, even paraplegics have done it."

When asked if age is a risk factor, Mr Lee said that as long as the older adults are able to walk on their own and meet the basic physical requirements, tandem skydiving should not be a problem.

Ms Koreen said: "For solo skydivers (not tandem ones), reaction times and mental acuity may decline with age. However, there are many solo skydivers in their 70s, 80s and even 90s who still jump regularly."

Mr Lee said it is standard practice for the elderly to have a doctor's medical certificate beforemaking a tandem jump.

He said: "It is not only to protect the organisation, but also for the tandem passenger themselves.

"After all, it's a fun jump, not something you want to get hurt by."

According to his office, that was his eighth jump. The first was made over the Pacific after his fighter plane was shot down during World War II on Sept 2, 1944.

The Health Promotion Board (HPB) recommends that everyone engage in an active lifestyle to promote and prolong good health.

STEPS TOWARDS A PHYSICALLY ACTIVE LIFESTYLE FOR ADULTS AGED

Choose to take the stairs regularly, run errands by walking instead of driving or riding, and move around for five to 10 minutes during long periods of physical inactivity (90 minutes or more).

Older adults should engage in 150 minutes of moderate-intensity or 75 minutes of vigorous-intensity aerobic activity a week.

Each aerobic session should last at least 10 minutes.

Older adults can maintain their physical fitness by exercising at least twice a week.

It will help to increase or maintain muscle strength, reduce the risk of falling, and improve mood and overall well-being.

Those with limitations, disabilities or chronic conditions should follow their doctor's advice.