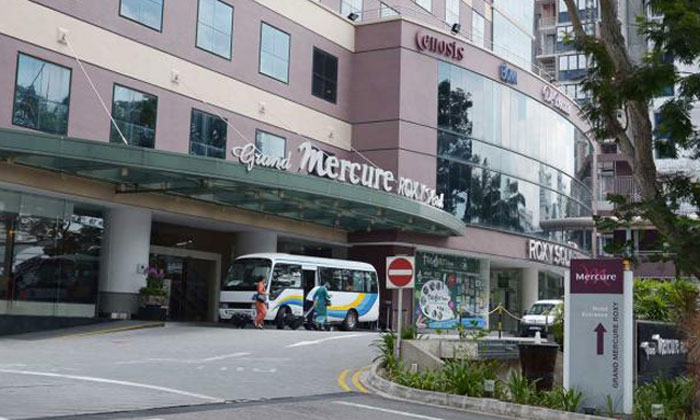 He was looking at his mobile phone while his six-year-old daughter, a non-swimmer, played in a swimming pool nearby.

Mr Zacharias Alexander Karamoy later looked up and saw, to his horror, his little girl motionless at the bottom of the deeper end.

The Indonesian national immediately jumped into the pool to rescue his child. But it was too late.

Neisha Sandra Karamoy, who had not been wearing a flotation device, suffered brain death and died in KK Women's and Children's Hospital (KKH) two days later.

Following an inquiry, State Coroner Marvin Bay found that her death was a tragic misadventure yesterday.

Because drowning can occur swiftly and silently, he stressed that adults should not make use of mobile devices while supervising children.

Coroner Bay also said that young children should use personal flotation devices when they enter bodies of water.

He added: "Nevertheless, it is important to remember these buoyancy aids, however helpful they may appear, are only aids and cannot drown-proof a child.

"They certainly do not replace close adult supervision in water of all depths."

Mr Karamoy, his wife, Madam Ni Ketut Sawitri, and their two children, Neisha and her seven-year-old brother, had arrived in Singapore for a holiday on April 3.

At around 10am the next day, Mr Karamoy decided to take the children to the pool while Madam Ni attended a course at the SIA training centre.

Coroner Bay said: "Mr Karamoy sat at the side of the pool while the siblings played in the pool.

"Mr Karamoy was browsing his mobile phone, and from time to time, he would check on them."

At the poolside, Neisha made a new friend, a five-year-old Singaporean girl, identified in court papers only as "Miss A".

The two girls were playing in the shallow part of the pool, which was 80cm deep, when Neisha wanted to go to the deeper side. That part of the pool was 1.2m deep while Neisha was only 1.15m tall.

When they reached there, Miss A panicked after she realised she could not touch the bottom.

Coroner Bay said: "She started to wave her hands vigorously and tried to get attention. (Neisha) was in front of her and was also seen struggling."

An unknown woman managed to rescue Miss A and took her back to the shallow side where the steps to the pool were.

The little girl's mother, who was nearby, rushed forward to console her daughter before the pair returned to their hotel room.

At around 10.30am, Mr Karamoy looked up from his mobile phone and noticed that only his son was at the shallow end.

He then spotted his daughter motionless at the bottom of the pool and immediately jumped into the water to pull her out.

Hotel staff performed cardiopulmonary resuscitation on Neisha and an ambulance arrived at around 10.45am to take her to KKH.

Brainstem testing also showed that she had suffered brain death.

After a family conference with her doctor, Mr Karamoy made the painful decision to withdraw his daughter's life support at around 1.30pm on April 6.

Coroner Bay said: "Mr Zacharias Karamoy was candid in stating that he did not pay enough attention to (Neisha) while she was playing in the pool.

"Children should be accompanied by a supervising adult, who must know how to swim and ideally provide 'touch supervision' - that is to say, to be close enough to reach the child at all times."

A seven-year-old boy drowned at the Hard Rock Hotel at Resorts World Sentosa after straying into the deep end of the pool.

Muhammad Syafizul Danyal Muhammad Shaffie and his brothers, aged eight and nine, had gone to the hotel with their grandmother.

She took him to the pool at about 4.40pm and asked an 11-year-old family friend to supervise him.

He died later in hospital.

Five-year-old Chinese national Liu Bingzheng drowned after he strayed from the children's pool into the adult pool at the Shangri-La's Rasa Sentosa Resort.

The boy was playing in the wading pool while his mother took pictures of him by the pool side. Shortly after, she realised that she could not hear his voice and went to look for him.

She found him floating face-down in the 1.2m-deep adult pool and called for help.

The boy was pronounced dead later that evening.

Three-year-old Muhammad Isaac Sau'ifi and his six siblings went for a dip at the children's pool at the Aloha Loyang Resort.

His mother later went to the toilet while his father went for a smoke. They noticed Isaac missing when they returned a short while later.

The toddler was found floating face down in the water and was pronounced dead the next day.

Related Stories
Couple complains of awful smell in Thailand hotel -- then makes this shocking discovery
Body of man in his 70s pulled out from Jurong Lake
More About:
death
tragic