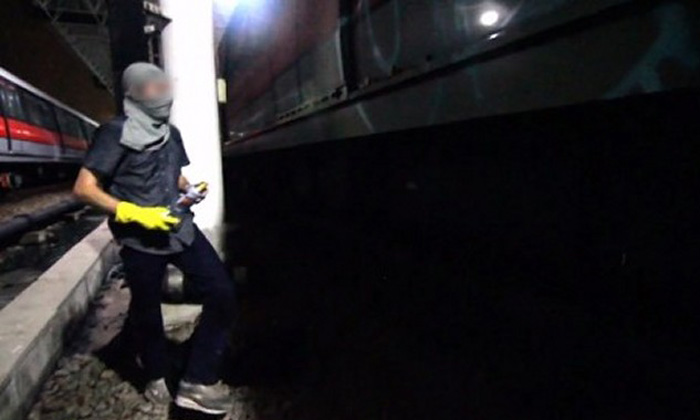 Five years after SMRT Bishan Depot was broken into and vandalised, footage of the crime has surfaced on Facebook.

According to AsiaOne, the culprits who broke into SMRT's Bishan Depot in 2011 have been identified as two graffiti artists from America, Jim Harper and Danielle Bremner, who go by the monikers Utah and Ether respectively.

The duo documented a series of videos, titled "Probation Vacation: Lost in Asia", which was shared on The Grifters, a Facebook page which calls itself as a society and culture website.

Harper's and Bremner's break-in in Singapore featured on the fifth episode of the series and was published on April 29, 2016.

The other episodes highlighted their break-ins in Kuala Lumpur, Hong Kong and India.

The video unravelled the answers which authorities had tried to find years ago.

From the footage, the camera zoomed in to the warning sign before panning out immediately to show someone cutting open the fence.

The pair were then filmed spray-painting the word "Jet Setter's" on a train carriage.

Their video also wrongly claims that the "general public of Singapore was outraged and the then President and CEO of SMRT Corporation was forced to resign" after the incident.

According to media reports, Harper was finally arrested in Australia. He was sentenced in May for eight charges relating to graffiti and assault. Bremner is currently on the run.

Local police told AsiaOne that they are aware of the arrest:

"We are currently working with the Australian authorities to facilitate investigations into the vandalism report at Bishan Depot in August, 2011."

The duo have defaced walls and trains in over thirty countries across five continents.

This is not the first time the pair have found themselves in trouble. According to the New York Post, they had been arrested in New York and Chicago, in 2008, for allegedly vandalising trains as early as 2005.

In an interview with The Hundreds, the pair didn't seem bothered by their break-ins.

They said: "'The act of cutting a fence or breaking into an airshaft is equally (and oftentimes more) rewarding for us than the actual finished product of graffiti.'

The duo told The Hundreds that they were drawn to the illegality of graffiti: "For us, the most important aspect of graffiti is it's illegality, and the vitality and energy that's inherent to illegal graffiti."

After saying all that, the duo put a 'disclaimer' in their video that they 'do not condone or promote any illegal activities including trespassing and vandalizing private or public property'.

The 2011 case was the second of its kind in Singapore, stumping authorities and members of the public alike.

Following the break-in, the Land Transport Authority slapped SMRT with a hefty $200,000 fine.

The vandals were never caught, and SMRT's problems were far from over.

The first break-in occurred in 2010 at Changi Depot. Swiss national Oliver Fricker was arrested and jailed for seven months, while his partner,

The latest case which happened in November 2014, again targeted Bishan Depot. This time, two Germans were caught and jailed for nine months.