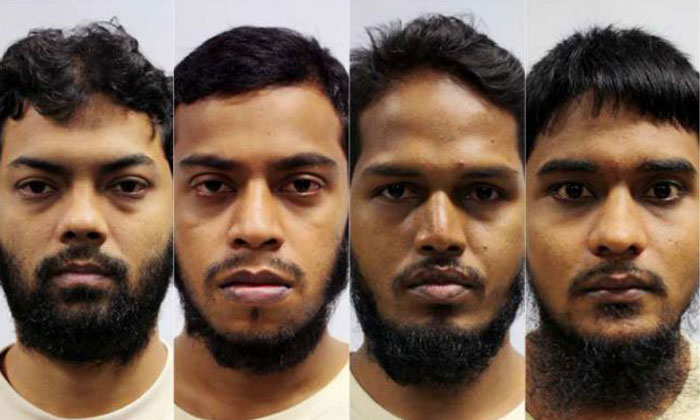 Four Bangladeshi nationals arrested in April under the Internal Security Act (ISA) were sentenced to between 24 and 60 months' jail on Tuesday (Jul 12).

They had pleaded guilty on May 31 to providing and collecting hundreds of dollars to fund terror attacks in Bangladesh.

The group's ringleader, Rahman, was sentenced to five years' jail. Sohel was given two years behind bars, while Miah and Jabath were given 30 months each, Channel NewsAsia reported.

All the sentences will be backdated to May 27, the day the men first appeared in court.

According to local media reports, the prosecution asked for a deterrant sentence.

"Much havoc can be wreaked with inexpensive items. The cost of a terrorist act can be modest, but the cost to society is far greater. Singapore must take a firm stance against terrorism and terrorism financing," they added.

The four men belonged to a group of eight who were detained in April this year.

The men were planning to set up an Islamic state in Bangladesh and bring it under the Islamic State in Iraq and Syria (ISIS). They were also planning attacks back home in hopes of toppling their government, The Straits Times reported.

Court documents revealed that the members of the group had clearly defined roles. Six of the men were also found to have contributed sums of $60 to $500 to the cause.

Meanwhile, two men in the group, Zzaman Daulat and Mamun Leakot Ali, have denied the charges.

The remaining two, Sohag Ibrahim and Islam Shariful, both 24, will be dealt with separately.