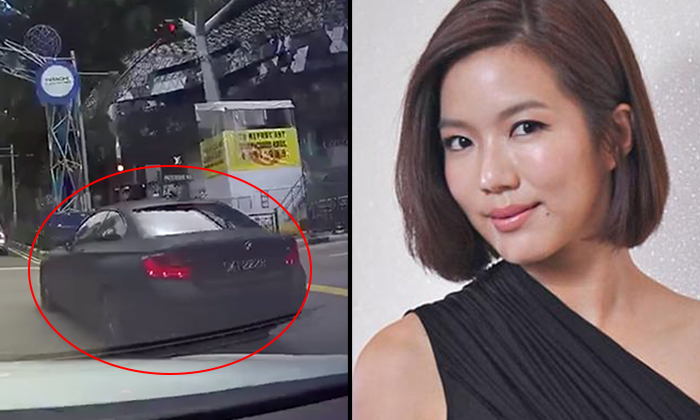 Actress Rui En has once again flouted traffic rules, this time driving her BMW straight on a right turn only lane in Orchard road, then cutting into the second lane abruptly, and almost causing an accident with an oncoming car.

The incident happened at a cross junction between Orchard Road and Paterson Road last Friday (Dec 23) at around 12pm, and a video of the incident was captured by the car camera of the incoming vehicle on the second lane, which Rui En had cut into, reports Shin Min Daily News.

According to the video uploaded on Facebook by Beh Chia Lor, the driver was approaching a cross junction and slowed his vehicle to about 30km/h, when the black BMW suddenly jumped his lane and overtook his vehicle.

A netizen even commented:

“Driving in such a manner is unsafe, and the car seems rather familiar…”

The famed black BMW is Rui En’s beloved ride, and the same car was involved in an accident earlier this year when Rui En accidentally hit a cab in a Clementi carpark.

Rui En herself has issued a statement via her agent citing her account of the incident that transpired:

When she found out that she was on the wrong lane, she turned on her signal beam before cutting into the second lane, after making sure that the incoming car was slowing down.

She also said that she didn’t mean to cause a scene or cause problems to anyone.

Have a look at what happened in the video below.