Reversing car knocks down woman and student at Bukit Timah 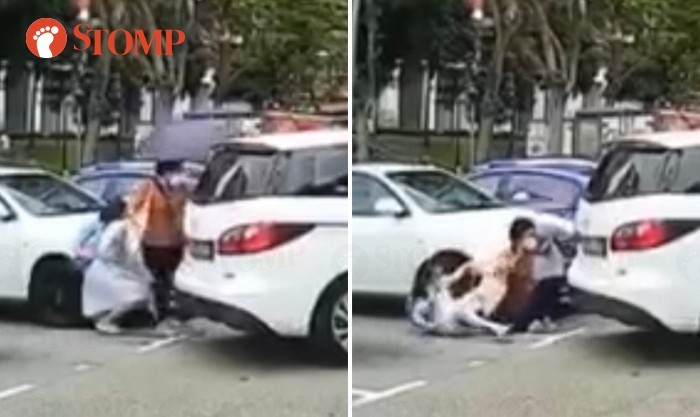 A driver knocked down a woman and a student while reversing into a parking lot near Bukit Timah Hawker Centre on Aug 27 at 1.31pm.

A Stomper alerted Stomp to the incident and sent a circulated video of what happened.

In the video, the old lady and the child can be seen looking at the opposite direction from where the car was reversing from.

The car can then be seen knocking the duo down before coming to a stop.

After the elderly lady stands back up, she proceeds to use her umbrella to hit the car.

"Who is to blame for this? Both parties seem to be in the wrong," said the Stomper.

"The car was not paying attention while reversing, and the elderly lady and the child still insisted on rushing past even though a car was there."

In response to a Stomp query, a spokesman for the police said: "The police confirm a report was lodged and investigations are ongoing."

Related Stories
Pedestrian crosses road during red light -- and gets knocked down by van
Woman, 67, knocked flat onto ground by van after dashing across road in Jurong West
Mercedes knocks over GrabFood cyclist at Toa Payoh Central
More About:
accident
knocked down by car
Bukit Timah
elderly