Rats running around potted plants at Stirling Road: 'I am just scared they will attract snakes' 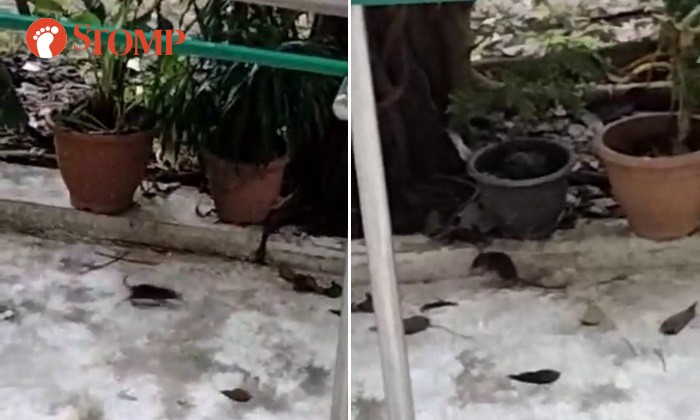 Here is something you may not know. What is a group of rats called? A mischief.

As in, a mischief of rats were seen up to unspecified mischief behind Block 48 Stirling Road.

Stomper Reena shared videos taken on July 23 at 5pm of the critters scurrying around the potted plants across the road from the Management Development Institute of Singapore.

She said the pests were there "because people from the block are always feeding them".

The Stomper wants the Government to do something about it.

However, her bigger worry is not the rodents themselves, but the animal that eats them.

"I am just scared they will attract snakes to come as they are the natural prey of snakes," she said. "Rats can be an indicator snakes are around."

Reena is understandably concerned about snakes since in May, she saw one at Commonwealth Drive, which is only about 1km from Stirling Road.

If the snake were around, there might not be any mischief.

In response to a Stomp query, Tanjong Pagar Town Council said it is aware of this issue.

"We have put up publicity posters to advise residents not to litter and have also activated our pest control officers to carry out pest control at Block 48 Stirling Road and the surrounding areas," said the town council.