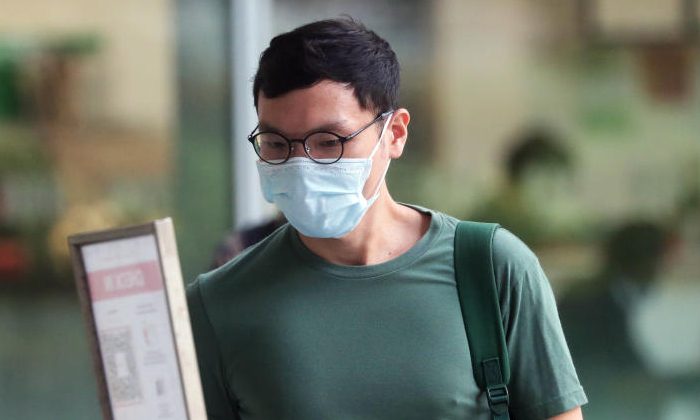 A postgraduate student was in a toilet at a local tertiary institution when he used his mobile phone to capture two videos and a picture of a man performing a sexual act in an adjacent cubicle.

The police arrived soon after and Han Win Tun's mobile phone was found to contain 17 obscene videos of men with their private parts exposed.

On another occasion, he used his mobile phone to record videos of a man and a woman having sex in a dormitory at the tertiary institution.

Details about it cannot be disclosed due to a gag order.

Han Win Tun was on Tuesday (Jan 11) sentenced to 13 weeks' jail after he pleaded guilty to four charges including insulting a woman's modesty and making obscene films.

He was at the tertiary institution on May 21, 2019, when he looked through a dormitory window opening and saw the couple having sex.

He then positioned his mobile phone towards the opening to record several videos of them.

Han Win Tun struck again at around 2pm on Aug 16 that year when he captured two videos and a picture of a man who was performing a sexual act in a toilet cubicle.

Deputy Public Prosecutor Emily Koh said: "Subsequently, the victim spotted the accused's mobile phone with its camera facing him, from above the cubicle partition. The victim immediately went out of the second cubicle. The victim walked towards the outside of the third toilet cubicle, where the accused was, and told the accused to stay still while he called for campus security.

"While the accused remained inside the third toilet cubicle, the accused deleted various photographs and videos that he had previously taken, including those of the victim in the moments prior, from his mobile phone."

Han Win Tun stepped out of his cubicle and campus security turned up soon after. The police were alerted at around 2.30pm that day.

The court heard that the authorities seized Han Win Tun's mobile phone and other electronic devices, including his thumb drives as well as memory cards.

The devices were later found to contain 91 obscene films.

On Tuesday, DPP Koh urged the court to sentence him to at least 14 weeks' jail, stressing that most of his voyeurism victims were unaware that he had filmed them.

Defence lawyer Cory Wong from Invictus Law Corporation pleaded for his client to be given not more than 12 weeks' jail.

Mr Wong said that the Myanmar national did not complete his postgraduate studies here and has since been suspended.

Han Win Tun's bail was set at $15,000 on Tuesday and he was ordered to surrender himself at the State Courts on Feb 8 to begin serving his sentence.