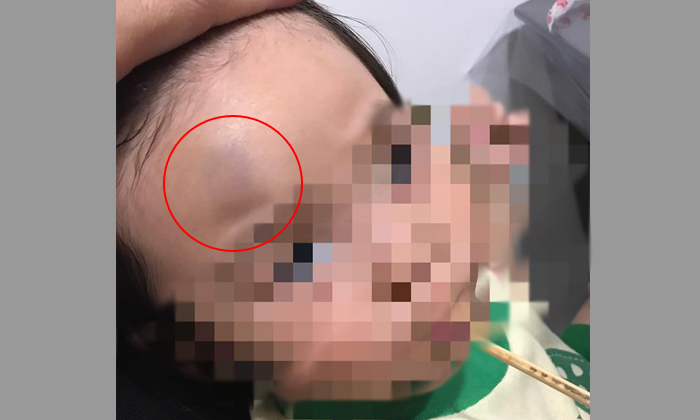 Parents of a three-year-old girl filed a police report yesterday night (May 24) after finding a bruise on the latter's forehead earlier the same day, after they had picked her up from school.

Facebook user Zeris Koh, who is the child's mother, had posted photos of the injury and police report online, as well as described what allegedly happened in a phone interview with Stomp.

According to Zeris, she found a bump on her daughter Kyra's forehead while bathing her.

She said that the bruise went unnoticed earlier when she picked Kyra up from Ichiban Montessori Child Care Centre at Hong San Walk, as it had been covered by Kyra's hair.

Zeris told Stomp, "I asked her how she got the bump and she told me in Mandarin that she banged her head at school. She also said, 'I pong, pong [hitting sound], I pain!' and that she had cried very loudly. She mentioned that her teacher was aware of what happened."

Reiterating what she wrote on Facebook, Zeris continued, "Immediately we called the school. They said that the accident did not happen in school as she had already left the school and we did not immediately spot the bump when we picked her up."

However, Zeris said that she would have known if Kyra had gotten hurt at home and sustained "a bump of this size" because "she would have definitely wailed her lungs out".

In her Facebook post, Zeris also said that this is apparently the second time that Kyra has gotten hurt in the five months that she has been attending the childcare centre.

She had received a call from them earlier in January this year, during the first week of school.

At that time, a teacher informed Zeris that her daughter had "bruised her cheeks when she banged into somebody in school."

She did not think it would be too bad at first, but was shocked when she saw a picture of Kyra as "it looked so serious as though somebody punched her".

Zeris added, "I asked the teacher why didn't she mention that it was that bad?

"She replied me, 'It was our fault actually but we have to inform the parents first, otherwise when the parents bring their kids back home and find out about the bruise, it wouldn't be our responsibility anymore since they have already left the school."

Having "doubts that a simple accident could cause her to bruise so badly", Zeris had then asked to watch CCTV footage of the accident, but was told that the childcare centre's CCTV system was "in the pipeline".

However, Zeris said that she had been told by the vice principal during enrollment that the school had a CCTV system, which was one of the main reasons why she chose to register her child there.

But following reassurance from the school, she decided to let the matter rest after taking Kyra to the doctor -- not expecting a similar incident to happen again.

Zeris also told Stomp that till now, no CCTV system has been installed in the school and hence, there is no way for her to check what happened to cause Krya's latest injury.

Stomp reached out to Ichiban Montessori Child Care Centre about the Facebook posting, but its principal said that it would not be commenting on the matter and would let the police investigate.

In response to media queries by Stomp, a Police spokesperson said, "The Police confirm that a report was lodged and are looking into the matter."