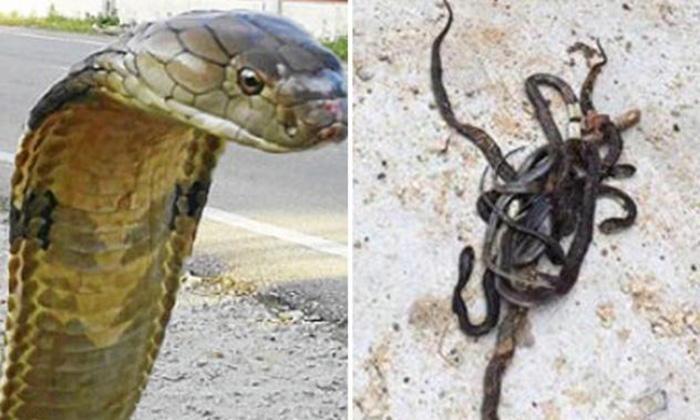 More than 200 young cobras recently escaped from a farm in Nanjing city, capital of East China's Jiangsu province, and more than 50 remained missing by end of Monday (Oct 10).

The local authorities said that the escaped cobras, or monocled cobras specifically, were illegally bred by the Chunyi Animal Breeding Cooperative based in the city's Luhe district.

The snakes disappeared between August 26 and 29, but it was only on Monday night that the local people found out through social media, reports China Daily.

"The farm has been searching for the runaway cobras and has captured or killed more than 150 of them," said the Luhe government Monday night.

The government discovered the incident after a cobra was found and killed in a villager's home on Saturday.

The farm bought monocled cobra eggs from Shaoguan city of South China's Guangdong province in early August and incubated about 1,820 cobras, out of which some 1,500 survived.

The farm had neither reported to the government nor got any permission for the breeding business before and after the incubation, according to local authorities, who launched a "carpet search" for the runaway snakes on Tuesday morning.

Officials from the Luhe government's publicity department said the young cobras, about 20 centimeters long, are not as dangerous as the adult ones.

They believe the snakes will probably not survive the upcoming cold winter.

Ecns news agency reported that the farm was shut down and those in charge would "be held responsible for the incident".

Related Stories
Huge king cobra found unable to move in Malaysia: It is believed to have eaten another snake
Epic battle ensues as monitor lizard feasts on snake at Bishan Park
Woman hunts for 'Ekans' Pokemon at Marsiling Drive -- and really finds a snake
More About:
snakes
China