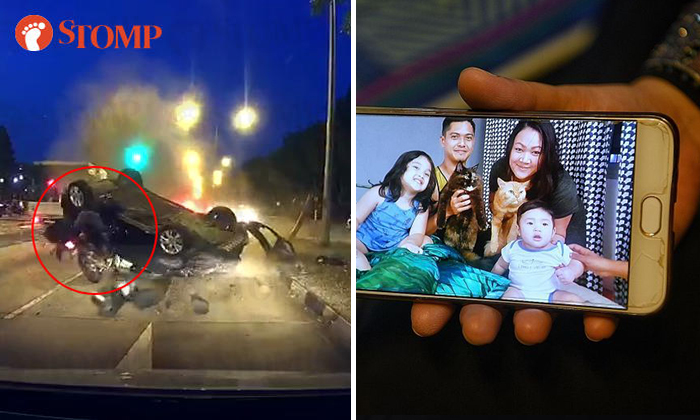 The motorcyclist who was killed in an accident at Woodlands on Monday (Aug 7), had just moved into a new four-room flat in Woodlands Rise with his family a week ago.

Mr Muhammad Khairman Mohamed Sabari, 30, and his wife had even planned an open house celebration this weekend.

Alas, an untimely accident, in which a car crashed into the motorcycle which he was on, put an end to the plans.

Another lorry driver was also caught in the accident but had escaped unscathed, while the other injured motorcyclist has been discharged from hospital.

The 32-year-old driver was arrested subsequently for causing death by a negligent act.

Mr Khairman’s widow, Nur Elina Sukhaimi, 31, told The Straits Times that her three-year-old daughter believed that the gathering at the home to bid farewell to her husband was a festive gathering, and does not know about her father’s death.

The couple who had been married for five years also have a younger child, Reyhan Luhaidan, born six months ago.

Mr Khairman is the youngest of his two other siblings and would fetch his wife on his way home from work,

However, on Monday, she had gone home herself as he was late.

Ms Elina recalled her last message to her late husband in which they discussed what to buy for the new home.

She said: "I tried calling him at around 7pm to confirm what he wanted for dinner... But his handphone was switched off, which was very unusual."

The bad news came when her brother told her that a motorcyclist had been involved in an accident in Woodlands.

The worried wife then went to a police station while her brother and cousins went down to the site of the accident.

At the station, she received news from her brother, telling her that her husband had been involved in the accident, and was killed.

She then braced herself and watched a minute-long video clip of the accident, the images which are still etched onto her mind.

Ms Elina also stressed that her husband was a safe road user, and had been driving from his time in national service.

She added: "He was a very safe road user. He was a driver... from national service till now... But judging from the video, there's no way he could have escaped.

"He would help people in trouble and give them advice. People looked up to him like a big brother.