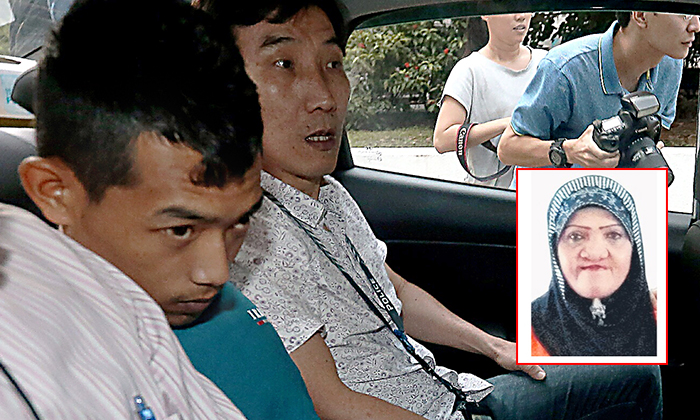 A 24-year-old man stabbed his 54-year-old supervisor and left her body in a drain at Tanah Merah Ferry Terminal before he returned to his home in Malaysia to prepare for his wedding.

Standing in court on Tuesday (Sep 17), the 26-year-old Malaysian Ahmad Muin Yaacob pleaded not guilty to the charge of murdering Maimunah Awang.

Between 12pm and 1pm on Nov 24, 2016, Ahmad and Maimunah were in a storeroom when he stabbed her chest with a pair of grass cutters.

While gasping for air, Maimunah pleaded with Ahmad to not kill her.

He then hit her head with the grass cutters and dragged her body to a drain nearby as she bled profusely.

Ahmad removed the drain's cover, dumped Maimunah's body in the drain and placed the cover back.

Shin Min Daily News reported that Ahmad fled the scene immediately. He returned to Malaysia on the same day and held his wedding 15 days later, on Dec 9.

Ahmad had planned to return to Malaysia on Nov 28 but was fired by his boss on Nov 8.

Maimunah had maintained a cordial relationship with her subordinates -- lending them money and treating them to meals.

Despite it being against the rules, Maimunah empathised with Ahmad and allowed him to stay in a storeroom after finding out that he had nowhere to live.

According to The Straits Times, Ahmad removed Maimunah's gold jewellery before dumping her body in the drain.

Ahmad put RM6,000 aside for dowry and used the money to gamble. He then sold the pawn ticket to another pawnshop for RM1,054 and used some of the money for his wedding.

In police statements after his arrest, Ahmad said he attacked Maimunah after she called him stupid and incompetent, and insulted his family.