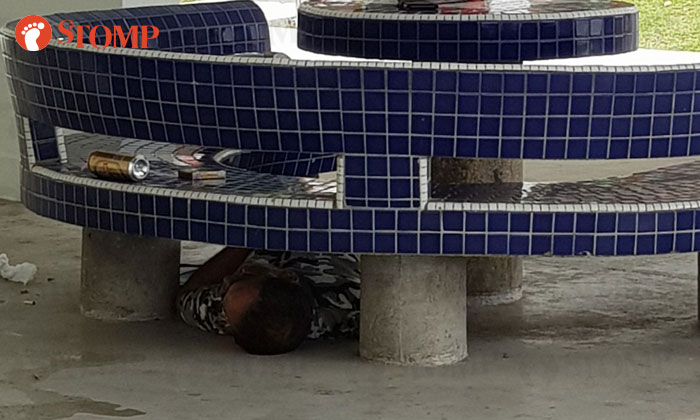 A Stomper has frequently sighted a man sleeping, drinking and smoking at the void deck of Block 624 Ang Mo Kio Avenue 4.

"I've seen him a few times drinking alcohol and smoking there," said the smoker.

He shared a photo of the man sleeping under a bench and table at the void deck where a can of beer and packet of cigarettes can be seen on the bench.

The photo was taken between 3 to 4pm.

"I'm concerned for the safety of my family with him around," he said.

The Stomper told Stomp that he reported the matter to the neighbourhood police centre.

Stomp understands that when approached, the man said that he had fallen asleep at the void deck because he was "tired".

He then said that he would take care of himself and left the area.

Related Stories
Only 6pm, but it's already bedtime for this man at Hong Lim Food Centre
Man lies down in the middle of Jurong West carpark -- at 5.30am
'Drunk' guy left at Tampines void deck after being dragged out of car by another man
More About:
sleeping
unusual
Ang Mo Kio