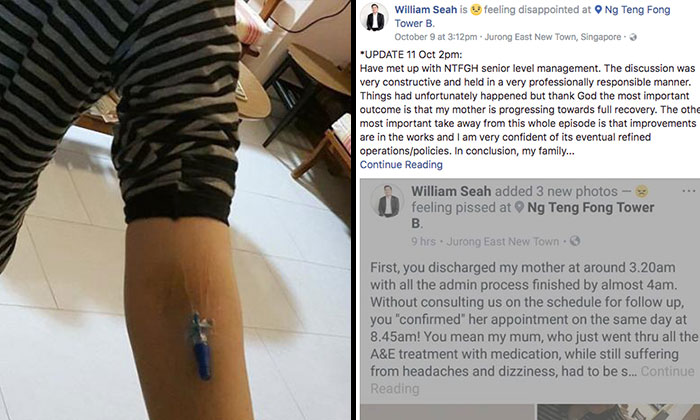 A man alleged that his elderly mother was discharged from Ng Teng Fong Hospital with an IV (intravenous) needle still embedded in her arm.

When the concerned son, William Seah, 39, spoke to hospital staff about the needle, he was told to remove the needle himself.

Seah told Shin Min Daily News that his 63-year-old mother was admitted to the accident and emergency (A&E) department in Ng Teng Fong Hospital after she suddenly experienced headaches, nausea and blurry vision on Oct 8, at around 9.39pm.

Said Seah: "The doctor diagnosed her with glaucoma and both her eyeballs were under pressure which led to her discomfort.

"After the treatment, she was prescribed some eye drops.

"Throughout the process, my mum was being taken care of professionally and in comfort."

However, upon reaching home, he found that the hospital staff did not extract a which was still stuck in his mother’s arm.

When Seah returned to the hospital to ask about the needle, their reply left him baffled. He was told that he could 'remove the needle himself'.

Seah shared his story on Facebook which read: "First, you discharged my mother at around 3.20am with all the admin process finished by almost 4am.

"Without consulting us on the schedule for follow up, you "confirmed" her appointment on the same day at 8.45am!

"You mean my mum, who just went thru all the A&E treatment with medication, while still suffering from headaches and dizziness, had to be sent home, only to sleep/rest for less than 2 hours, and return back to the hospital?

"Asked to reschedule the appointment, (but) was told 'cannot' because the doctor fixed it already. Asked to be warded, so that she could have a good rest, also cannot.

"So quick to take our money, but won’t adhere to our requests!

"Totally ridiculous!! If it was that urgent to come back for follow up in 5 hours time, shouldn't she be admitted?

"Secondly, we reluctantly went home, but once reached and when my exhausted mum took off her jacket, only to realise that you left a 'present' for her, in the form of a needle (for IV) NOT REMOVED!!

"Called the hospital and was told it was easy to remove by ourselves else have to return to the hospital.

"My poor mum was already totally drained and still hurting, and you still require her to run up and down like being played.

"Hello... we trusted you to take care of the sick and pay the ever-increasing medical fees as requested believing that we will be in good hands!! Despite the trust and medical charges, this is the kind of rubbish "professionalism" displayed?

"I would like to think otherwise but it seems like, in my opinion, the so-call medical service that you displayed shows extreme lack of empathy, appallingly unprofessional practices, perhaps because IT WAS NOT YOUR MUM that was suffering, hence the indifference.

"NG TENG FENG GENERAL HOSPITAL, in my eyes, you are a total disappointment!"

After Seah’s initial post, he was contacted by Ng Teng Fong Hospital and told that the hospital will look into the matter seriously.

In the most recent update on Oct 11, Seah said that he had met up with the hospital’s management and discussion between the two sides was ‘very constructive’ and held in a ‘very professionally responsible manner’.

He added: "Things had unfortunately happened but thank God the most important outcome is that my mother is progressing towards full recovery.

"The other most important take away from this whole episode is that improvements are in the works and I am very confident of its eventual refined operations/policies.

"In conclusion, my family and I decided to have closure from this entire experience, with a huge sincere thanks to everyone who had stood, supported and reached out to us."

In response to a query from Shin Min Daily News, Ng Teng Fong Hospital said that investigation was ongoing for the case.