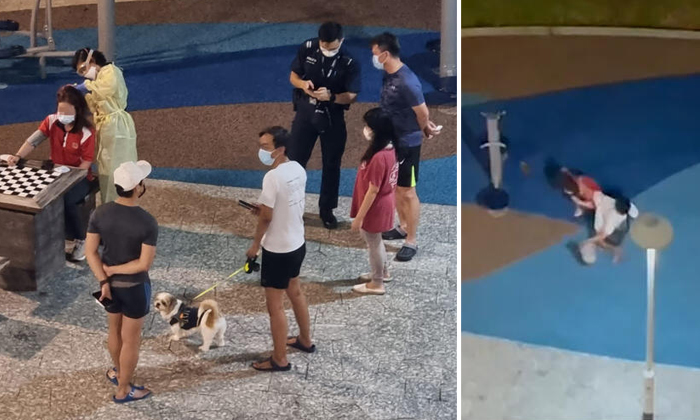 A man allegedly kicked a woman in the head at a fitness corner in Sembawang Crescent on Wednesday night (Nov 3).

The victim is believed to be his wife, reported Chinese-language newspaper Shin Min Daily News.

The police said they received a call for assistance about the alleged assault at Block 363B, Sembawang Crescent, around 9.30pm on Wednesday.

The 48-year-old man was reportedly behaving aggressively towards the 46-year-old woman, who was squatting on the ground. He suddenly kicked her in the head, prompting passers-by to hurry over to stop him.

The couple is believed to be renting a room in a flat in a nearby block.

The flat's landlord, who wanted to be known only as Ms Cai, told Shin Min that when she returned home that night, she saw the woman sitting at the foot of the block. She complained about being beaten by her husband.

The 50-year-old said: "When I reached the unit, I saw that the husband was intoxicated, so I did not dare to ask questions. I don't know how the dispute happened."

A neighbour, who wanted to remain anonymous, said he heard the man shouting loudly downstairs, but could not make out what he was saying.

He then saw the man push the woman.

The Singapore Civil Defence Force said the woman was assessed and found to have minor injuries. She did not want to be taken to a hospital.

Related Stories
Clementi man leaves shocking blood trail after smashing window during dispute with wife
Man arrested at River Valley after slapping woman and shouting at police: "Do you know who my mum is?"
Man scolds woman and handles her roughly during spousal dispute in Bukit Batok
More About:
couple
dispute
abuse
assault