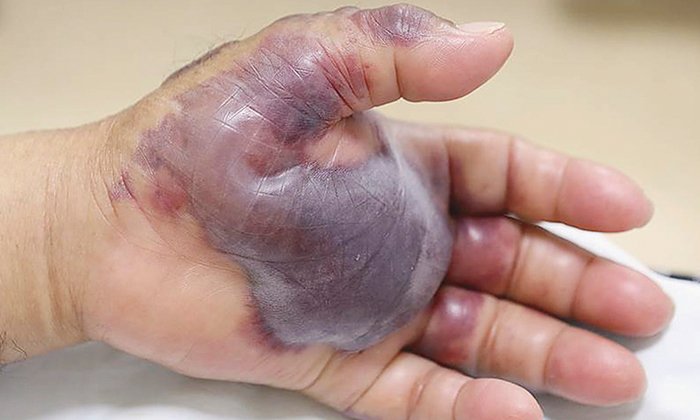 A 71-year-old South Korean man ate some raw seafood and ended up losing his left forearm to a life-threatening bacterial infection.

12 hours after his meal, the elderly man was in excruciating pain as his left hand started to swell, according to a medical report recently published in The New England Journal of Medicine.

He was taken to a hospital in Jeonju where he found to be infected with Vibrio vulnificus - a 'flesh-eating' bacteria.

The man had a blood-filled blister measuring 3.5cm by 4.5cm on the palm of his left hand, as well as swelling on the back of the hand and forearm.

Doctors performed emergency surgery to drain the blister and save his life.

With a medical history of diabetes, hypertension, and kidney failure, the chances of the man making a full recovery were lower than usual.

After surgery, the patient was treated with antibiotics but his skin lesions developed into necrotic ulcers after 25 days.

His left forearm was eventually amputated and he was later discharged from the hospital.

Vibrio vulnificus infections are said to be a persistent public health threat in countries like South Korea and Taiwan, and are most prevalent between June and September every year, said a report published in The Korean Journal of Internal Medicine.

Those with medical conditions that compromise the immune system have a higher risk of getting infected and developing complications.

The prognosis of vibrio vulnificus infections depends largely on whether a patient receives timely diagnosis and appropriate treatment, according to medical texts.