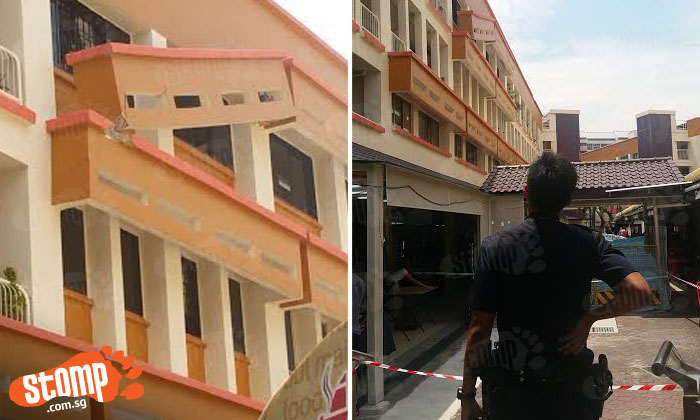 Onlookers stared as a piece of the building at Block 201E Tampines Street 23 looked like it was about to come crashing down today (Sep 25).

The concrete sunshade on the top floor of the four-storey block had given way and was thankfully supported by the one below.

When the Stomp Team went to the scene at about 12pm, passers-by were still crowding around the area.

Police were seen cordoning off the area to ensure the residents' safety. They were also seen talking to the shopkeepers from the stores directly below the damage on the first level.

According to one shopkeeper, nobody was injured in the incident.

"It did not hit anyone," she said.

Photos sent by Brandon later at 4.30pm show workers trying to clear the collapsed structure from the building.

The Building and Construction Authority (BCA) issued a statement clarifying that the concrete sunshade did not affect the structural integrity of the building:

"Earlier today, the Building and Construction Authority was alerted to an incident where the concrete sunshade located on the fourth floor of HDB Block 201E at Tampines Street 23 was dislodged at one side and rested on the sunshade on the third floor. The dislodged structure is part of the architectural façade of the building’s exterior.

"The areas directly below the dislodged concrete shade have been cordoned off for public safety. BCA has directed the building owner (Tampines Town Council) to engage a Professional Engineer (PE) to advise on the necessary measures to removethe dislodged sunshade, carry out a detailed investigation and recommend permanent rectification works. The PE engaged by Tampines Town Council has inspected and assessed that the structural integrity of the main building is not affected by the incident.

"As an added safety precaution, the building owner’s PE is also required to inspect all the other HDB blocks in the area with similar architectural façade."