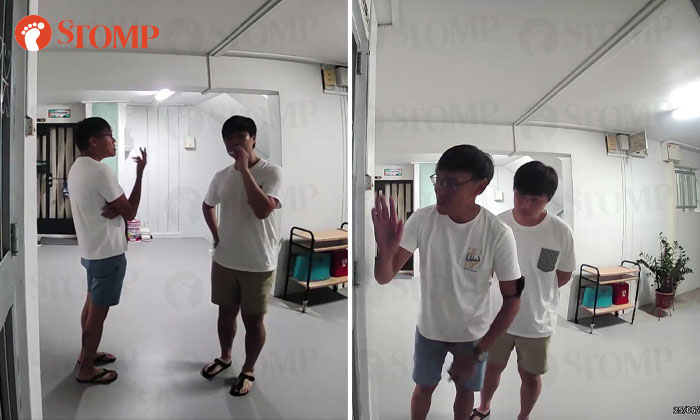 It is not unusual for Singapore households to receive an occasional visit from volunteers collecting money for charity but one family's suspicions were raised when their doorbell rang past 1am.

Stomper B shared with Stomp a video of two men who were seen hanging around his unit at Hougang Street 51 before ringing his doorbell at about 1.21am.

"These two men, in their late 20s or early 30s, were spotted smoking and prowling along the corridors of my block since 1.15am," he said.

In the video, they are seen loitering near B's unit and seemingly pointing at his doorbell camera.

They then go down the staircase but return shortly after and wait in front of B's door.

When a woman opens it, one of the men says in Mandarin that they are "student volunteers" and that they are doing a donation drive.

Considering the circumstances, B was not convinced and told Stomp that he has since made a police report.

The police confirmed with Stomp that a report was lodged.

"This is the first time I've seen these two men around my neighbourhood and the very first time having 'charity' groups visiting past midnight," the Stomper said.

"Please help to share with the public community so that they will be aware and alert and not fall victim to scammers."