Honest elderly man finds owner of 4D ticket that won $5,000 -- but there's an even better twist 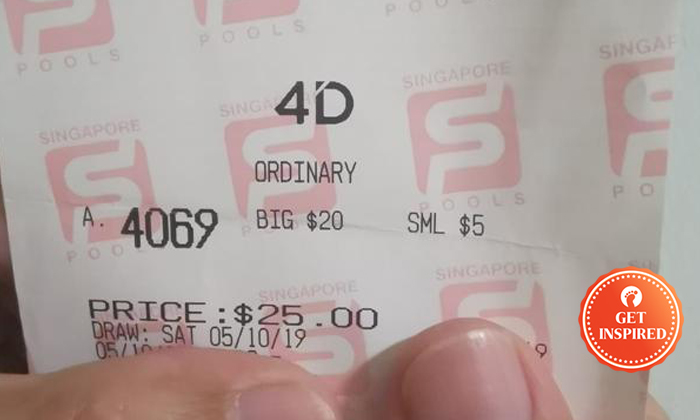 An elderly businessman who accidentally ended up with someone else's winning 4D ticket sought various means to return it instead of pocketing it.

Not only did he manage to locate the owner, he is now being rewarded for his honesty.

Mr Yang, 63, said he visited a Singapore Pools outlet in Redhill last Saturday (Oct 5) and following his purchase, kept a stack of more than 10 lottery tickets in his wallet without checking them.

He told Shin Min Daily News: "I didn't think much of it but later realised that one of the tickets had a number that wasn't purchased by me.

"At that time, I thought the betting kiosk had printed the wrong number. However, upon closer inspection, the time printed on that particular ticket was earlier than my time of visit."

Mr Yang recalled that the printer at the betting kiosk had required a change of paper that morning. He believes that the ticket had been accidentally sandwiched within the paper and was later given to him by mistake.

Mr Yang said he visited Singapore Pools' head office on Oct 7, hoping to leave the winning ticket there so that its owner could claim it.

However, staff apparently told him that lost lottery tickets should be taken to the police station.

"I want to be a good man but it's so troublesome, so I decided to appeal for help through the media. I hope the ticket can be returned to its rightful owner," said Mr Yang.

"This money does not belong to me and I do not covet it."

On Thursday (Oct 10), Shin Min reported that the owner of the winning ticket has been found.

A 65-year-old man contacted Shin Min after reading its original report about Mr Yang's discovery and has been verified as the ticket's owner.

The older man said he had a lot of tickets after buying many numbers that day, but did not make proper checks after payment.

He was extremely upset after learning that he had won a prize but lost the ticket.

He recounted: "I was very happy when I realised that I had won, but could not locate the ticket no matter what. I was already planning to give up when my wife saw the newspaper report and informed me. My hope was rekindled."

He also said he would be meeting Mr Yang today and plans to split the prize with him, adding: "If not for this Good Samaritan, I would not have recovered my ticket. I will definitely thank him in person."