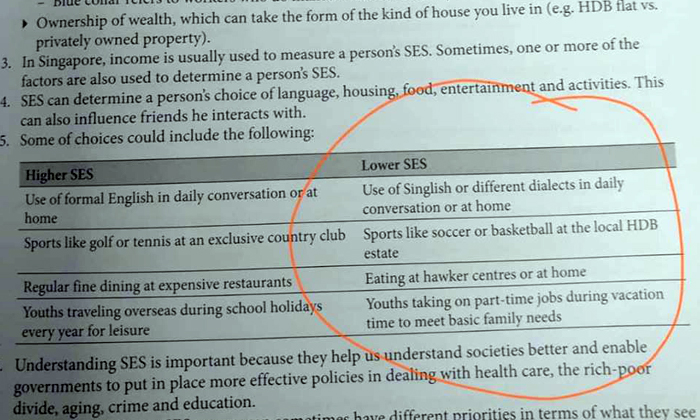 Do you speak Singlish, play sports at HDB void decks, eat at hawker centres or work to earn money during your school holidays?

Why, then you belong to a lower socio-economic class -- according to this Social Studies guidebook for Secondary 3 students.

In a post that has since gone viral with over 6,000 shares, Facebook user Ahmad Matin shared a page from the Rowan Luc book, titled 'Complete Guide to GCE O-Level Social Studies Vol 1', which discusses Socio-Economic Status (SES) in Singapore.

The 38-year-old said he came across the book at a prominent local bookstore.

For instance, according to the book, using formal English to converse indicates you are from a higher SES while speaking Singlish implies that you are from a lower SES.

The book has been criticised by netizens for its "inaccurate" generalisations of Singaporeans.

"Commercial learning materials approved by MOE will bear the Ministry’s stamp of approval on their front cover or inside the book," added the spokesman.

In response to the outrage, distributor MarketAsia said that the particular section of the book should be "read in context of the whole chapter, which discusses crucial themes pertaining to Singapore's social mobility and inequality issues".

According to The Straits Times, this section corresponds to chapters four to seven of MOE's new social studies syllabus, introduced last year, about diversity in Singapore. It also deals with topics like race and religion.