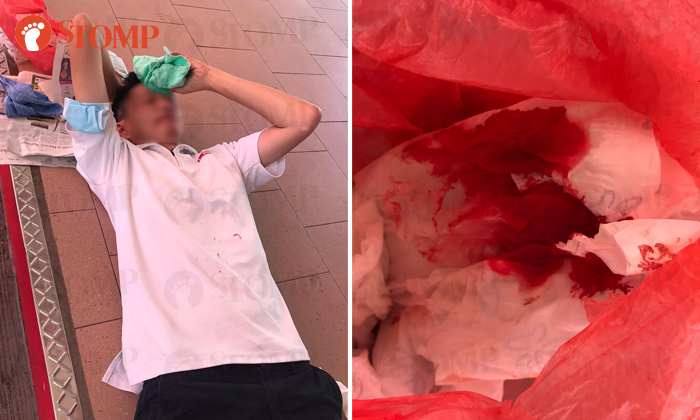 A man was taken to hospital after being found bleeding at a hawker centre in Yishun on Friday (Feb 19).

Stomper Alvin Sin, a ComfortDelGro taxi driver, said he was having lunch at Chong Pang Food Centre at around 11.45am when the incident occurred.

He recounted: "I was having lunch when I suddenly saw a man who was sitting near a food stall with a lot of blood coming out of his nose non-stop.

"I ran to a drinks stall get ice and a towel to help stop the bleeding, and immediately called 995 for the ambulance.

"The man, who is 54 years old and has heart problems, was sent to hospital.

"His brother thanked me for saving his life."

Photos taken by Alvin show the man, who is lying on the ground, holding a towel to his head and a plastic bag containing bloodied tissues near him.

Paramedics can later be seen attending to the man.

In response to a Stomp query, the Singapore Civil Defence Force (SCDF) said it received a call for assistance at Block 105 Yishun Ring Road at about 11.50am and conveyed a person to Khoo Teck Puat Hospital.