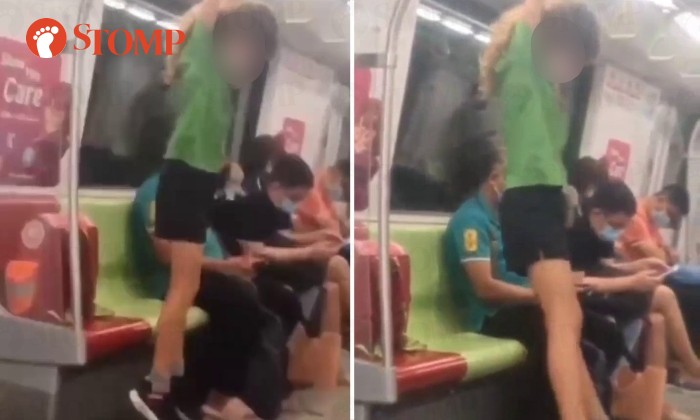 Is it the parents' fault?

A schoolgirl was caught on camera swinging from the handrails on a Downtown line MRT train near Cashew station on Sept 29.

Sharing a video of the incident, Stomper Soyasauce said children were playing on the train at 5.45pm.

"One of the kids was using the MRT handrail as a monkey bar. The mother didn't bother to stop her," recounted the Stomper.

"This went on for around 10 minutes. Some of the passengers were minding their own business, but others found it a bit disturbing."

In the two-second clip, the girl appears to be wearing a house T-shirt of Chatsworth International School, located at Bukit Tinggi Road in Bukit Timah.

"I feel that parents nowadays are not giving their children basic discipline," said the Stomper.

"I think is the parents' fault and not the children's when they create a nuisance in public."

Related Stories
Kids swing from handrails on MRT train until another passenger tells them off
Commuter stunned by man doing pull-ups on train
Kid hangs on and swings from handlebars on MRT train -- for 15 minutes
More About:
children playing
MRT train
youth behaving badly
public nuisance