Getting 'paid' to watch movie trailers? Beware of Ponzi-like scam: 1 arrested, 3 under investigation 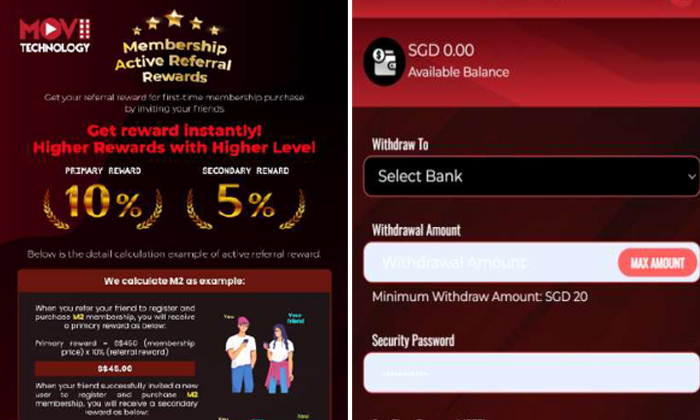 A 29-year-old man was nabbed for his suspected involvement in Ponzi-like job scams that involved the earning of commission by viewing movie trailers.

The arrest was made by the Commercial Affairs Department during an island-wide anti-scam enforcement operation conducted on April 1 and April 5.

"This job scam portal purported to be an online platform where users would be paid to watch movie trailers," the police added.

"The job seekers would be able to increase their earnings by recruiting more people to participate on the platform."

"To enroll into this alleged money-making opportunity, the job seekers would be required to register a free account and purchase a membership plan, ranging from $65 to $450, before they would be start earning commissions by watching the movie trailers on the platform.

"All top-up and withdrawal transactions would be performed in the form of bank transfers.

"In most cases, the job seekers would be convinced that it was a legitimate job as they would receive commissions and profit during the early stages of their memberships.

"They would realise that they had been scammed when they did not receive further commissions or were unable to make withdrawals from their member accounts."

During the operation, officers from the Commercial Affairs Department mounted simultaneous island-wide operations and arrested the man.

Another three men, aged between 18 and 41, were identified and are currently assisting with investigations for their suspected involvement in the scams.

Preliminary investigations revealed that the bogus company was believed to be running Ponzi- like schemes using Multi-Level Marketing (MLM) strategies.

The four men are believed to have facilitated the schemes by advertising and recruiting potential job seekers as members, and providing bank accounts to facilitate the movement of illicit funds.

The offence of fraud by false representation of position not connected with contracts for goods and services carries a jail term of up to 20 years and/or a fine.

Additionally, the offence of aiding the commission of fraud carries a jail term of up to 10 years and a fine.

The police cautioned job seekers to be wary of online job advertisements that promise the convenience of working from home and being paid a high salary for relatively simple job responsibilities.

They added: "Legitimate businesses will not require job seekers to make upfront payments to secure job offers and earn commissions.

"These acts are common ruses used by scammers to lure individuals into participating in their schemes or scams.

"To avoid becoming involved in money laundering activities, members of the public should always reject requests to use their personal bank or cryptocurrency accounts to receive and transfer money for others."

Members of the public are advised to adopt the following precautionary measures: