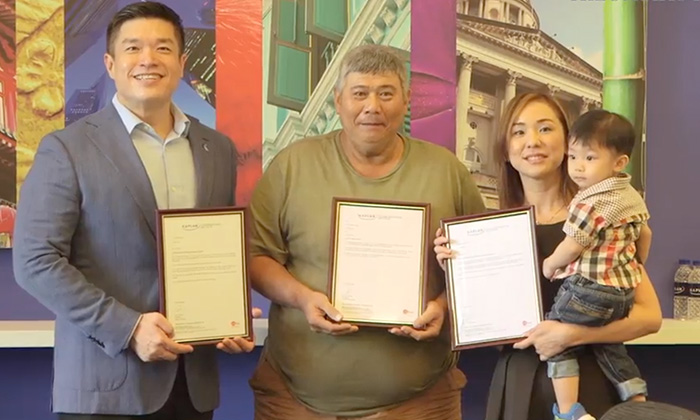 He helped pay for her studies at Kaplan Singapore when she could not afford the course fees. Now, Kaplan has rewarded him in kind - by sponsoring his daughter's tertiary education.

A few months after their chance encounter in late 2013, technician John Shu, 50, gave about $6,000 to Ms Jaycie Tay, 32, a single mother of four who was at the time struggling with a divorce and getting the money for a diploma.

In 2014, she completed her diploma in marketing management from Kaplan Higher Education Institute.

About a week after Kaplan learnt about Mr Shu's kindness in a report in The Sunday Times, the private school decided to return the favour to him, by paying close to $20,000 for the tertiary education of his 22-year-old daughter Shermin Shu.

Kaplan invited Mr Shu and his family to the Kaplan City Campus @ Wilkie Edge, in Wilkie Road, on Tuesday (Dec 13), where the school surprised him with news of the sponsorship.

Ms Shu is currently on holiday in Thailand and was not able to attend Tuesday's ceremony, so her father received the sponsorship on her behalf from Kaplan's president, Mr Leon Choong. He also received a document from Kaplan to recognise his act of generosity.

Speaking from Thailand, Ms Shu said her family was "on cloud nine", and explained that Kaplan had called her on Tuesday morning with the news.

"I was lost for words for a moment. Honestly, I thought that I was dreaming, because who would have thought that a simple kind gesture of giving my dad had done would give us such a good reward at the end," she said.

Ms Shu recently completed her three-year diploma course in visual communication at Nanyang Polytechnic and plans to pursue her passion in arts and design at the university level, either locally or overseas.

Kaplan will reimburse the costs of her entire polytechnic education, worth about $8,000 to $9,000. It will also help contribute $10,000 towards her university degree, wherever she chooses to pursue it.

Mr Choong, Kaplan's president, explained that he was touched by Mr Shu and Ms Tay's story when he read about it in The Sunday Times, and convened an emergency board meeting to see how the school could help Ms Tay.

Upon learning that she is already receiving aid from the Yellow Ribbon Fund Star Bursary, they turned to Mr Shu instead.

"John had set in motion a chain of kindness, and in the concept of paying it forward we didn't want it to end there," he said.

He highlighted that Kaplan sets aside $250,000 yearly in scholarships and sponsorships, and that it is usually to study at Kaplan itself, "but in this particular case... we went above and beyond what was the norm - that's why we had to convene a board meeting".

Ms Tay said that before this, she felt very bad because she could not repay Mr Shu, but she is now grateful. "When Kaplan told me that they wanted to recognise his kind heart, I felt like God sent something to help me repay (him)."

"I just want to thank him for giving my daughter this opportunity to study at a university."