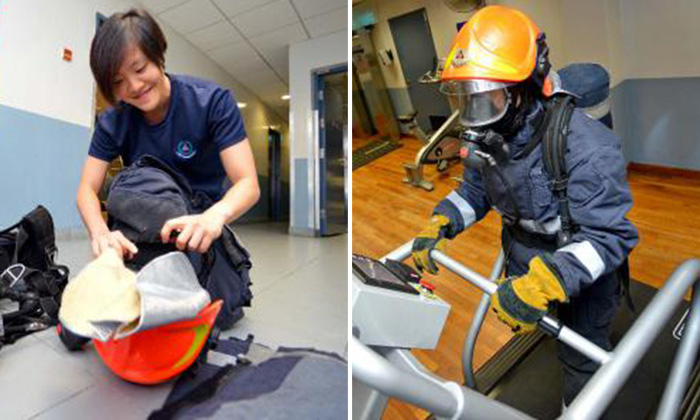 Fortunately, she managed to call the police in time and her friend, who had a broken heel, was given medical treatment.

After that incident, Ms Clare Tan, 26, told herself that one day, she would be the one providing the medical help.

She was among the 16 trainees - 12 men and four women - who graduated yesterday at the Civil Defence Academy (CDA).

Recalling the abseiling incident, Ms Tan, a research engineer at the Agency for Science, Technology and Research (A*Star), said she was in a cave called Quaking Pot in Yorkshire Dales, an area in northern England, when the accident happened.

She said: "When I saw my friend fall, I knew we needed external help because I could not haul him out by myself."

Now, if something like that happens again, Ms Tan will be prepared.

The A*Star scholar topped the theory component and was also first in the obstacle course during the gruelling 16-week training programme for prospective volunteer firefighters.

In a demonstration for The New Paper at the CDA on Tuesday, Ms Tan was able to perform the six components of the Breathing Apparatus Physical Test - while wearing a 15kg firefighting suit that included breathing apparatus equipment such as an oxygen tank and a face mask.

The tests included climbing a ladder that is continuously being unrolled, pulling 25kg of weights using an apparatus called an impact machine, cycling at 80kmh and going through an obstacle-filled tunnel.

Ms Tan said: "We're always pushed to the limit - but never beyond our limit."

The male-dominated environment did not deter her from joining the programme.

She said: "There were three other female trainees, and although we may not be as physically strong as the men, firefighters work in a team. Everyone works to his or her strength."

He said: "She really puts in a lot of effort. Before the training, she would come in early to run about 4km just to warm up."

Mr Chong said: "I wanted them to see me as a lifesaver. I want them to say 'I'm proud of Papa'".

The VFFC is a part of a larger volunteer force within the SCDF, the Civil Defence Auxiliary Unit (CDAU), which provides opportunities for civilians to contribute to civil defence efforts.

This is the second time the VFFC is training volunteers with no prior firefighting experience.

The number of trainees has gone up from 11 people last year to 16 this year.

Colonel Abdul Razak Raheem, Commandant CDAU and director of the SCDF's Volunteer and Community Partnership Department, said: "VFFC was created to help in raising the level of community emergency preparedness and, more importantly, to generate an active pool of Community First Responders during an emergency.

"In an emergency, the SCDF cannot be everywhere all the time and the fastest available help someone in distress could get is from a trained member of the community who is near him or her."

To women keen on joining the course, Ms Tan said: "Just go for it. "(Even) if you think you are not strong enough for the task, you should not let any apprehension stop you from giving it a go."