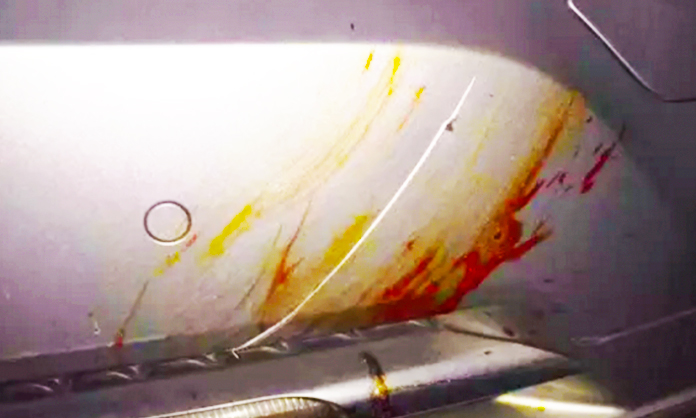 A wild boar that ran into a luxury car became the talk of the town in Hangzhou, Zhejiang province, after photos of the accident went viral.

The driver, surnamed Hu, was driving home in a silver Mercedes-Benz at about 8pm on Tuesday (Nov 30), Qianjiang Evening News reported.

He said that he saw the boar in the bicycle lane of the Lingxi Tunnel. The animal was large and "shiny", he said.

Hu said he was not driving very fast, but it suddenly dashed out and banged into his car.

He saw that the boar was hurt and its snout was bleeding. It glared at Hu fiercely.

"I did not dare leave the car. If it came for me, I would be in trouble," he told Qianjing Evening News.

When he got home, he found that there was a deep scratch and bloodstains on the car. He believed the scratch was caused by the boar's tusk.

"It's obviously its fault, but I can only say I was unlucky. But I hope it was not hurt too badly," Hu said.

The photos of the boar and the damage to Hu's car were later shared by many netizens.

The whereabouts of the boar is currently a mystery. Police said a report was made but they did not manage to locate the animal.

Related Stories
My my, look how huge this monitor lizard at park near Khoo Teck Puat Hospital is!
boar
animals
accident
China