Whose fault is it though? Bride falls on crotch while walking along fence -- then gets upset at husband for her pain 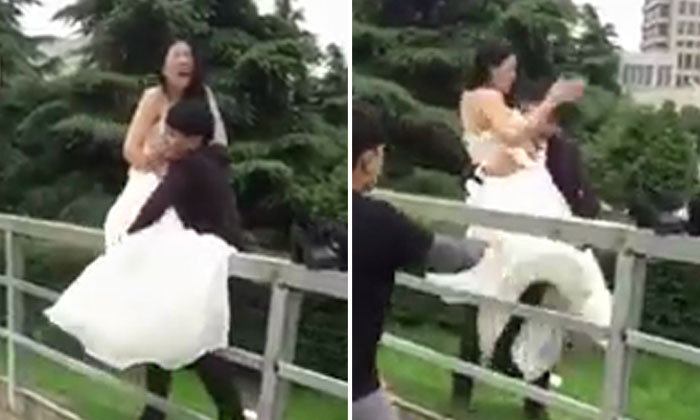 A bride was walking along a narrow fence for a photoshoot when she lost her footing and fell on her crotch, leaving her in complete agony.

A video of the incident was posted onto 陈晓倩's Facebook page and has garnered over 41 million views and 756,000 shares.

Although one would never want to wish the pain the woman must have felt onto anyone, it is hard not to laugh at the comedy of errors that ensue.

After the woman falls on the fence, her husband rushes to carry her off.

Instead of letting him be her knight in shining armour, she starts to vent out her pain at her husband by hitting and shouting at him.

The husband in turn gets frustrated at the situation and kicks at the railing, only to miss and tumble down the small slope.

Watch the hilarious video below.

Related Stories
Ouch! Watch how dancing grandma trips and falls on small kid
Girl tries to twerk on window, breaks it
Being drunk and crossing the stream is just a bad combination
fail
fall
Wedding
photoshoot
bride falls on crotch then hits and shouts at husband