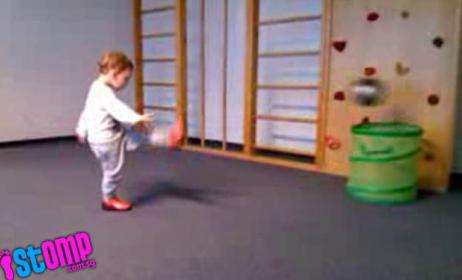 Maksim is just two and a half years old, but shows great potential as a football talent, as his mother Stomper Dragana shares.

Stomper Dragana from Vienna, Austria, sent in a video of her son displaying his football tricks.

In January, she emailed Stomp a video which shows him dribbling a soccer ball better than the average person, as well as kicking it through hoops and past various objects.

In the latest video, Maksim proves that his skills can only get better as he goes through 'obstacle courses' like pushing three dangling soccer balls with his head, jumping over three bars on the floor, then kicking a ball into the goal.

Maksim also shows incredible accuracy as he manages to shoot a ball into the goal which is partly covered by a mat and a writing board, leaving little space.